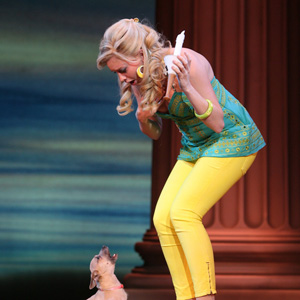 Putting in a solid performance as Elle Woods is Becky Gulsvig. Her voice resonates through songs like “Legally Blonde,” which let her take a breath and bring some emotion to the role. With so many high-energy numbers in the show, it’s nice to slow things down and let the actress bring a bit of herself into the part.

Speaking of parts, two of the ensemble in this show are played by actors who made their talents known on the MTV reality show, “Legally Blonde The Musical: The Search for Elle Woods.” Fourth runner-up Lauren Zakrin is also the understudy for Woods, and third runner-up and L.A. resident Rhiannon Hansen plays Woods’ best friend, Margot.

“It’s been a whirlwind ever since we got to rehearsals,” says Hansen about moving so fast from MTV to the stage and being on tour. “To be working with this talent is unreal. Everyone is at the top of their game, so it really pushes you to perform that much better. And the fans notice it. It’s great meeting all the girls after the show that want to do what I’m doing. I was just in their place a year ago. I tell them to stick to it because anything can happen. It just takes that one audition.”

With this kind of enthusiasm from the cast it’s easy to see why this show is making such a ruckus in Hollywood. The audience left with smiles on their faces and a song in their step. Not an easy task in a city where there’s a new show every night.