Post Grad: When Reality Hits You in the Face 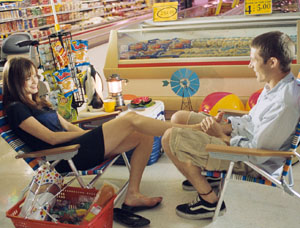 Picture this: A college graduate with big dreams of making it out on her own is hit with a cold, hard dose of reality when she finds, despite a good education, willingness to start at the bottom and just the slightest whiff of desperation, she can’t find a job anywhere and is forced to move home with her crazy family.

Sound familiar? Sure, the majority of college graduates are entering the worst job market in recent American history, but this isn’t the tale of some girl who lived down the hall from you freshman year; it’s the setup for Post Grad, a new comedy starring Alexis Bledel (“Gilmore Girls,” The Sisterhood of the Traveling Pants) and Zach Gilford (“Friday Night Lights”), backed by a comedic goldmine including Michael Keaton, Jane Lynch, J.K. Simmons and Carol Burnett.

The script was written by first-time scribe Kelly Fremon, who admits the film is largely autobiographical, if you eliminate the romance and the diabolically hot neighbor played by Rodrigo Santoro.

“I started writing this script when I was at home on my parents’ couch after I’d graduated,” Fremon begins. “I just felt like the biggest and the only loser on the planet.”

But over the course of creating a theatrical version of her loser-dom, she discovered she was surrounded by friends who were dealing with similar issues and post-collegiate angst.

“That’s part of the reason I was really compelled to write it, because I started to find that everyone I knew was going through the same thing. Everybody was coming up against so much friction in the real world.”

“When we started on the movie, we knew it was universal,” director Vicky Jenson adds. “[In your 20s] you have these wonderful expectations where you just think you know everything.”

Before anyone knew how topical the film would be, the director says she just wanted to make a movie about the potentially unwanted lessons learned “when you have to start making your own decisions and reality hits you in the face. It’s about growing up, graduating to the next chapter in your life.”

For Jenson, Post Grad is also a sort of graduation. After decades in animation, this is her first foray into working with people in front of her lens.

“You could tell she’s an animator because, at one point, she was telling me to move as if she were animating me,” Bledel recalls with a chuckle. “My idea was to just do everything exactly the way she said. I didn’t want to stray from it if she had a vision.”

“The upside to that,” Gilford is quick to point out, “is that she knew what she wanted. She never seemed like she wasn’t sure. She had it all in her mind.”

One of the things Jenson and the rest of the production had in mind was great chemistry between their two leads. Bledel was attached to the project for some time before, serendipitously, her male counterpart was cast. One actor dropped out just as the writers strike halted production on “Friday Night Lights” allowing Gilford to fly to Los Angeles to audition for the role.

“We were asked to do these acting exercises together,” Bledel begins, before bursting out laughing as Gilford turns fuchsia.

“It’s awkward. It’s really awkward,” Gilford interjects. “They shove you in a room, and they’re like, ‘You need to charm this person and have great chemistry with them in order to get the job.’ And you’re like ‘OK.’”

“It’s a bit forced,” Bledel agrees, collecting herself. “And you can’t force chemistry; you just have to read the scenes.”

When asked if either has ever known the post-graduate deluge of failure the film mines for laughs, both shake their heads.

“I haven’t personally,” Bledel admits. “But I’ve experienced setbacks where I had to regroup and start from scratch.”

“I was fortunate enough not to have to go home,” Gilford says, good-naturedly. “But it’s still early, I could move home next week.”