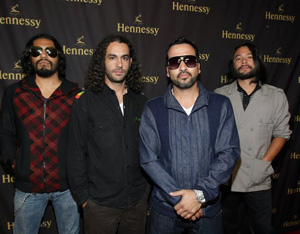 A penthouse party is just what everyone needed. It took place at LoftSEVEN in Downtown, and the up-and-coming group Maleco Collective performed at the Hennessy “Artistry” event.

Lead singer of the band, Malverde stated, “It was an amazing crowd. The beauty of it is that there were different races present. This shows that between sounds we are universal.”

“With our instrumentation and different rhythms, we resonated the whole crowd,” Malverde added.

Maleco Collective sang convincingly in front of all those who attended, including NBA player Charlie Villanueva, actress Ruth Livier and actor Nicolas Gonzalez, among others.

Marthin Chan, who executed the production of the group’s album Al Horizonte, said, “I didn’t expect it to be that much of a high production. It was a showcase to feature this new project in a high profile scene in L.A., which was linked up with Hennessy.”