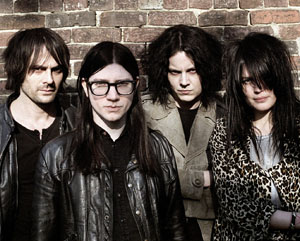 “I was in the right place at the right time,” says the Dead Weather guitarist Dean Fertita. “I had just finished touring with Queens of the Stone Age, and I went down to see the last two Raconteurs shows in Atlanta. After, I was planning on going back to Jack’s [White’s] home in Nashville for a couple days, and the idea of Alison [Mosshart] getting on the bus and coming up to record a seven-inch happened. It was really just good timing.”

It may seem a bit hard to believe that the creation of the Dead Weather was so spur of the moment, seeing as the mastermind behind the band was Jack White (White Stripes, the Raconteurs). And the powerful collection of songs found on the group’s debut album, Horehound, proves that the convergence of these four musicians was anything but happenstance.

The Dead Weather is White’s first project where he is on the drums while a female vocalist, Alison Mosshart (the Kills), commands the forefront. Jack Lawrence (the Raconteurs, the Greenhornes) rounds out the quartet on bass.

As with most Jack White projects, it’s the group’s live performances that truly leave audiences breathless. Being able to see the band two nights in a row and have two distinctly different experiences, even if the set is comprised of the same set of songs, is almost to be expected.

“It’s constantly open for improvising,” says Fertita. “That’s one of the really great things about this group of people, everybody’s really good players. Everyone has known each other for a long time, too, so there’s already a level of comfort there. Most bands, it takes years to get that. But since I played with Jack [White] and Little Jack [Lawrence] in the Ranconteurs for a while and they have known Alison for a long time, there’s that trust already there. It’s good to know how each other operates.”

Fertita is certainly no stranger to touring life. In the late-’90s, he led the Waxwings to prominence in the Detroit scene on vocals/guitar, although guitar was not his first instrument.

“I started playing piano when I was 6 until I was 12 or 13. Then I bought a guitar and didn’t look back for a few years,” he shares. “I got back into playing music with Brendan Benson. In 2005, I toured with him as a two-piece when he was doing promos for his The Alternative to Love record. We did some acoustic shows, and I got back into playing keyboards then. It’s thankfully prepared me for all these other opportunities.”

But now, Fertita resumes lead guitar duties with the Dead Weather and shares writing credit on over half the songs on Horehound, including the album’s first two singles “Hang You from the Heavens” and “Treat Me Like Your Mother.” The entire album is dark, edgy and in your face – all words that could also describe the atmosphere surrounding its recording.

“Two things that we did [during recording] were: we went to a circus, and we went and shot machine guns,” recalls Fertita. “When we did our first show in Nashville, we hand painted 150 covers and did 150 photo booth strips to give out. We had taken the covers to the firing range, and we shot holes in them. [Everyone at the show] got a single riddled with machine gun holes.”

With the incredible musical pedigree of each member of the Dead Weather, it’s no surprise that many have labeled them a supergroup. But to the four band members, all that matters is the music, and that they’re making it with people they call friends.

Horehound is currently available. The Dead Weather will perform Aug. 25 at the Wiltern, Aug. 26 at the Mayan and Aug. 27 at the Glasshouse. For more information, visit thedeadweather.com.