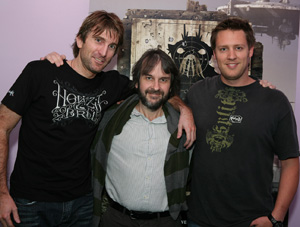 Inevitable sequel news: When X-Men Origins: Wolverine made $87 million its first weekend, it was pretty much guaranteed that there would be a sequel. It appears as if now the Wolverine 2 development train is officially pulling out of the station with the hiring of a writer.

Christopher McQuarrie, who wrote The Usual Suspects and Valkyrie and wrote and directed The Way of the Gun, has been hired to take a first crack at the sequel script. This is the type of guy you want writing a superhero movie.

The Usual Suspects is one of my all-time favorite movies and arguably one of the best films of all time, with one of the greatest third act plot twists in the history of cinema.

More often than not these types of projects go through a bevy of writers before the studio settles on a shooting draft, and sadly, a lot of times they don’t know when to stop developing the script. McQuarrie originally wrote the first version of the script for the first X-Men film that Bryan Singer directed, but was replaced by David Hayter (X2, Watchmen).

Whether or not Fox uses McQuarrie’s eventual draft for Wolverine 2, I’m willing to bet it’ll be an awesome script.

This October, Sony is going to be theatrically releasing a film chronicling the rehearsals for Michael Jackson’s ill-fated “This Is It” tour that will carry the same title. This Is It will be a mix of rehearsal and behind-the-scenes footage of Jackson as he prepped the concert, and will also serve as a career retrospective featuring interviews with Jackson’s friends and artists he had worked and collaborated with over the years.

I’m assuming that the film will be released in IMAX format as well because the press release said that some of the film will be presented in 3-D. Don’t get me wrong, I love Michael Jackson and I’m definitely going to see this film, but the idea of seeing his face fill up an IMAX screen is a little unsettling.

What Michael Jackson did to his face is very unnerving, to say the least. Seeing him in pictures and television is one thing, but seeing him in person was probably even weirder.

Like I said, I got mad love for Mike. He’s influenced me creatively and artistically for years and years, and this will probably be an awesome Michael Jackson experience.

District 9 is the real deal.

I had the pleasure of seeing District 9 on Aug. 12, directed by Neill Blomkamp and produced by Peter Jackson, and let me tell you this is the real deal Holyfield. This is what people need whether they know it or not.

This film is five sugary scoops of awesome. It’s on par with some of the great science fiction stuff from the ’70s and ’80s before the whole sci-fi genre became cheez whiz.

This film needs to succeed so it can send a message to studio executives everywhere that there is a need and a demand for original filmmaking. If this film doesn’t do well, then the bosses are going to believe that people don’t want original films and they’ll just keep cranking out remakes and sequels.

I really believe that the movie-going public wants original movies and would probably love this film, but people get weird when it comes to getting off their asses and going to the theater. I don’t know whether people are apprehensive to spend money on something that isn’t familiar to them or what, but this endless barrage of zero creativity on the part of Hollywood has to change. Everyone needs to stop being a part of the problem and start being a part of the solution, and the first thing everyone can do is to go to the theater and make District 9 a hit.