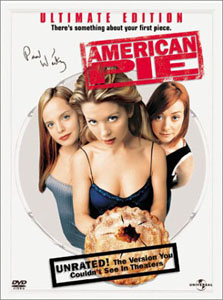 Browsing the video store (the what?) you see two versions of the film you want to rent. Of course you go for the “Unrated” version – hey, it’s raunchier, gorier, etc. Except that, it’s actually the opposite. It’s longer and slower. What’s the deal?

“Unrated,” dear consumers, does not mean “Rated X,” nor does it mean “NC-17.” It simply means the studio took the existing version of a film and reinserted footage previously relegated to a DVD’s “deleted scenes.” They then elected not to submit this version to the ratings board. Presto! You have an unrated cut! Put some cooler looking cover art on it, and you have an instantly better selling version! You could even sucker people who already saw it in theaters into paying to see it again.

But why would they do this, release a knowingly inferior version of a movie? The answer: American Pie.

It was a huge and surprising success, responsible for the rebirth of the R-rated teen sex comedy. So when the un-rated DVD appeared, teens hungry for more raunch dug in, giving birth to a new marketing ploy.

But this trend isn’t just confined to gross out comedies or horror films. Even completely mainstream action movies, originally released as PG-13, like Mr. & Mrs. Smith, Con Air, even Hancock are laughingly getting the unrated treatment.

This is not just some innocuous marketing technique. It is tampering with the actual film – not that the majority of these movies are great artistic achievements, but it does come down to affecting the basic enjoyment of the movie. Pacing, characterization, a performance made embarrassing – all can be completely changed with one scene.

Often, because these versions are perceived as more definitive or more extreme, and are therefore better selling/renting, stores will bias their stock in their favor. This bloated cut eventually becomes the definitive version of a film.

Turning the stigma of unwanted scraps into a bonus for the viewer takes an even more perverse turn with so-called “serious” films, which get released as “director’s cuts.” Again, this is regardless of whether the theatrically released version was the director’s intended cut.

This is pure marketing and has nothing to do with censorship or artistic freedom. In fact, the studios have inverted the typical struggle between director and vision and have taken it upon themselves to “restore” footage that was purposefully left out.

The only films of the last 30 years requiring directors’ cuts are Ridley Scott’s Blade Runner and Terry Gilliam’s Brazil. In both cases, the directors underwent Orson Welles-like battles with the studio over the final cuts, with both of the theatrically released films being completely mutilated versions of their restored cuts. The studios prey on consumers’ half-knowledge of these kinds of Hollywood battles and, in the name of integrity, cash in on these “director’s cuts.”

Compounding the deception is an insidious practice, which often accompanies these alternate cuts, known as “double dipping.” This is the tactic in which a studio will release several different editions of a DVD over carefully timed intervals in order to essentially extort loyal movie fans. Often the subsequent releases will contain additional supplemental features to further entice diehard followers to pay for the same film multiple times.

Hollywood wonders why people are so turned off by movies these days, why they would rather download rather than waste $20 on rehashed tripe. The answer, dear studio execs, is because instead of allowing filmmakers to make risky yet potentially good films, you instead resort to the tricks of snake oil salesmen to try to squeeze every nickel out of these bland properties.

As Howard Hawks said, “A good movie has three good scenes and no bad scenes.” So what happens when they start purposefully inserting extraneous or even bad scenes into movies? Do studio brass really have such contempt for the product they’re hocking?