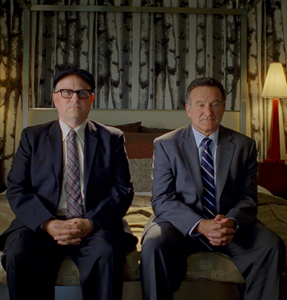 After blazing a path to stardom in the 1980s thanks to three Police Academy films and his shrieking, twitching, acerbic stand-up persona, perhaps best known simply by the voice (a cross between Sam Kinison and Pee Wee Herman), Goldthwait has found a second act in Hollywood as writer and director. His fourth film, World’s Greatesst Dad, stars his longtime friend and collaborator Robin Williams as Lance Clayton, an aspiring writer-turned-inconsequential poetry teacher, loathed by his son (Daryl Sabara, who’s given a treasure trove of hilariously vulgar dialogue), ignored by his students and cuckolded by his girlfriend, until a tragic event turns out to be the greatest opportunity of his life.

Williams initially read Goldthwait’s script as a favor to his old friend, thinking he would play a small part and lend his name to help the production secure financing, but he became so enthralled by the film, he asked if he could play the lead.

“It was one of the best scripts I’d read,” Williams says in a brief moment of calm between the frenetic friends. “After I saw Sleeping Dogs Lie, I went ‘He’s not afraid to take on an unusual subject like girl-blows-dog. Let’s see what he does with this.’”

While Goldthwait’s last film was shot in two weeks with a crew from Craigslist, World’s Greatest Dad swelled with the addition of Williams.

“Robin wanting to be in the movie changed everything,” Goldthwait explains. “People ask if I wrote it with Robin in mind, but if I was going to write a role for him, I’d stay away from poetry teacher. That was pretty well handled before.”

“We can call this Dead Penis Society,” Williams instantly quips.

“It’s so exciting to make these movies because they’re way more personal,” Goldthwait says. “These are way more about me than anything I’ve ever done on stage. I’ve always hid behind a persona and this really is who I am.”

“The Bob that I know,” Williams chimes, “is this really intelligent, film-savvy man who’s also so humane. That’s what I think the movies are. What’s at the core is this great humanity. At the end, there’s a tenderness to it, a kindness. As nasty as the subject matter is.”

Nasty indeed. Vulgarity and impropriety are risen to operatic levels in Goldthwait’s films, but not in a Farrelly brothers, insert-fart-joke-here way. His deft touch and covert benevolence elevate a seeming sewer of profanity and make them comedic gold. Williams is also a master wielder of dirty words; so what are their favorites?

“Dog cock!” Goldthwait is quick to reply. “Three out of the four movies I’ve made; there is a dog cock in it.”

Williams has a harder time choosing just one.

“Which baby do you sacrifice?” he jokes before finally knighting “cunt” as his ultimate choice.

But World’s Greatest Dad isn’t just a torrent of curse words and dick jokes; it’s a hilarious, gut-wrenching, heartbreaking, sidesplitting dark comedy that features some of Williams’ best work since Good Will Hunting.

“I’m really proud of this movie,” Williams declares. “It’s small, but it’s beautiful in a weird way. I trusted [Bobcat], and I’m very happy I did. It was the most open I’ve ever been.”

“Every time you jump and you don’t know what’s going to happen, that’s when everything seems to work out,” Goldthwait adds. “But it’s terrifying.”