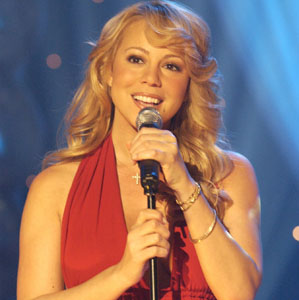 The American Cinematheque is known for screening the best in foreign and domestic classics at their two L.A. theaters. Last week, however, they traded this tradition of greatness to showcase the nine best of the worst.

Playboy’s Stephen Rebello and MSNBC.com’s Alonso Duralde convinced the Egyptian Theatre to run five nights of movies that are “So Bad, They’re Brilliant,” and the lineup from earlier this week included a disco double feature of Xanadu and Saturday Night Fever, a night of pulp chick flicks Kitten with a Whip and The Lonely Lady and the Hollywood musical that almost killed the genre, Lost Horizon.

But even if you missed those awesomely bad gems, tonight is the coup de grâce, two movies that are so ridiculous that they have quickly moved up the ranks of horrible to reach “OK to watch when the party is winding down and there is literally nothing else around” – Glitter and From Justin to Kelly.

Mariah Carey’s Glitter was filmed prior to her 2001 emotional meltdown and follows the rise to fame of a club singer during the early ’80s. It is not supposed to be autobiographical, but so totally is that you’d think Carey would at least attempt to make the acting realistic. Instead, she wears side ponytails and spandex (get it? It’s the ’80s!), exposes popular singer Sylk as a lip synch-er, bros down with her foster care friends (one of whom is Da Brat) and, eventually, sleeps with a short white DJ named Dice (He’s the only one that believes in her!).

In the same vein of pop star ego fluffing – but without any of the pre-horrible movie career cred – From Justin to Kelly was “American Idol”’s attempt to franchise its first season winner and runner-up. What Fox failed to realize is that by 2003 everyone was over seeing attempted teen pop acts blankly read a script into a camera (see Spice World, On the Line and Britney Spears’ Crossroads), and the movie flopped so badly that it was at the video store six weeks after its theatrical release.

The movies in the Egyptian Theatre’s latest series may be the worst of the worst, but much can be learned from their existence. So whether you plan on attending tonight’s double feature of brilliant badness for the laughs, the tears or the justified confusion, understand that everybody makes mistakes and, unfortunately, some of those are captured in feature-length films.