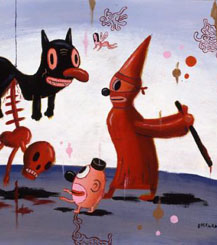 Francis Bacon made sweet love to Walt Disney and had a … what exactly is Toby? I guess he’s a fez-wearing, morbidly voyeuristic cat.

At Billy Shire Fine Arts in Culver City, Gary Baseman has his third Los Angeles show in three years. Curator of libido, Baseman is most popularly known for his animated Disney series/recent feature film Teacher’s Pet, his New Yorker magazine cover, artwork that graces the popular board game Cranium, and, well, you’d know his work if you saw it. It’s swimming around there in your preconscious, breaking into cognition for moments like when Entertainment Weekly names him "IT Illustrator of the Year."

Baseman’s show at Billy Shire is 12 hours on the TV schedule from Teacher’s Saturday morning time slot on ABC – call it Post Meridian Baseman. For the Love of Toby features Basemen’s iconic character – that large nosed, wide-eyed cat – in a potpourri of un-Baseman-like situations.

"Even though the illustrations are quite juvenile, the theme is much more adult," Baseman told me of his artwork. In Baseman’s world, the characters never seem aware of how abused, unintelligent or wicked they are. In one illustration, this fezzed creature looks up the dress of Betty Boop’s cousin. In another, he’s bathed by two girl scouts.

The artist places his work "...where the line between genius and stupidity has been smudged beyond recognition." But he’s wrong. The plane of genius is clearly visible.