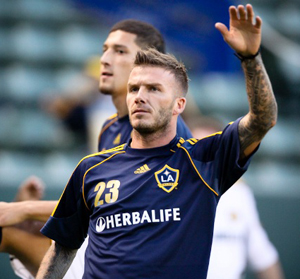 The Galaxy’s David Beckham received a direct red card in the 17th minute of Saturday’s game against
(Credit: Rudy Sanchez)

The Seattle Sounders FC defeated the Los Angeles Galaxy 2-0 at the Home Depot Center, and the win pushed the visitors (31 points) atop the hosts (30 points) in the Western Conference standings.

Beckham received a direct red card in the 17th minute of play for a vicious foul, and the Sounders took advantage of their extra man on the pitch. Galaxy head coach Bruce Arena did not like Beckham’s actions.

“With the way he [Beckham] came in hard, I could see how the referee would determine it a dangerous tackle,” Arena stated in the press conference room.

The Sounders scored their first goal five minutes after on behalf of forward Steve Zakuani. Fredy Montero then sealed the win in the 55th minute with his 10th goal of the season.

“From Pete Vagenas’ corner kick I was able to connect on the rebound for the score,” Montero told Campus Circle.

For the Galaxy, midfielder Eddie Lewis also got a red card (in the 79th minute), while the Sounders’ Tyrone Marshall recorded one of his own two minutes prior.

Los Angeles hits the road for two matches, starting today in Chicago at 6 p.m. and Saturday at DC United at 4:30 p.m.