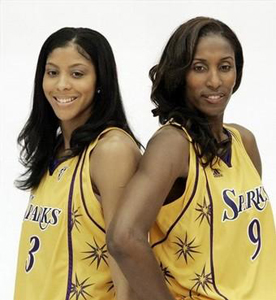 Candace Parker and Lisa Leslie of the Sparks

The Los Angeles Sparks kept their slim playoff hopes alive by defeating the Sacramento Monarchs, 78-61, on Saturday night at ARCO Arena, thanks to 18 points and seven rebounds from Candace Parker. The victory ended a two-game losing skid for the Sparks (9-13), who trail the San Antonio Silver Stars (11-13) for the fourth and final playoff berth in the Western Conference.

A second game of a home-and-home set with the Monarchs (7-18), the Sparks managed to bounce back after losing the night before at Staples Center, 85-79. After that game, Sparks head coach Michael Cooper told the Los Angeles Times he believed his team’s playoff hopes looked bleak.

Less than 24 hours later, the Sparks bounced back with a strong effort in Sacramento, with Noelle Quinn adding 14 points and DeLisha Milton-Jones scoring 13. Lisa Leslie finished with 12 points and nine rebounds.

The Sparks have 11 games remaining to pass San Antonio for a playoff berth, beginning tonight at home against the 11-13 Minnesota Lynx. The L.A. squad face the Silver Stars Friday in San Antonio and the 13-11 Dream in Atlanta on Sunday before hosting the Chicago Sky (13-12) at Staples Tuesday.