The Black Cloud and A Sigh of Relief 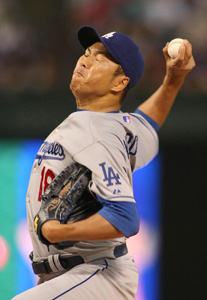 In one split second Saturday night, Aug. 15, at Chase Field in Arizona, a gasp went out that suddenly put everything in perspective. Thirty four-year-old Dodger pitcher Hiroki Kuroda, a husband and father of two, collapsed on the mound after being beamed in the head by a line drive comebacker off the bat of Diamondbacks’ Rusty Ryal. As the ball ricocheted high into the air and bounced out of play for a ground rule double, concern about the game suddenly seemed trivial as the Dodger position players ran to the mound to check on the crumpled Kuroda.

It would be nearly 10 minutes before Kuroda was carted off on a spineboard with a brace around his neck as a precautionary measure. Unexpectedly, the crowd and announcer Vin Scully were overcome with thoughts on the very preciousness and temporality of life.

“Everyday there are near misses, but always in the background, the black cloud,” Scully announced ominously.

He was speaking about the ever-present danger in baseball, where hard bullets are routinely thrown and hit with mighty force. Because these sudden impacts are relatively rare, the danger is not always properly appreciated. But on Saturday, the world of baseball was particularly cognizant, as earlier in the day, across the country in New York, Mets’ third baseman David Wright went down with a concussion after being hit in the head with a pitch. Taken to the hospital and diagnosed with a concussion, Wright could miss the remainder of the season.

Whenever instances like these occur, the name Ray Chapman comes to mind. A much-loved shortstop for the Cleveland Indians, Chapman died after being struck by a pitch in a game during the 1920 season. Since that day, the tragic story has been told and retold as a reminder of baseball’s danger.

The recent occurrence of several bench-clearing brawls between opposing teams belies the notion of baseball as a mere gentleman’s pastime. Beneath the surface, the ferocious competition is informed by the possibility of life-threatening injury.

Following Saturday’s scare as Kuroda was taken off the field, the Dodgers took a big sigh of relief when news came from hospital doctors that Kuroda was doing fine. Tests showed neither a bone fracture, internal bleeding nor significant brain trauma.

Reportedly, Kuroda was most curious about when he could pitch again. That question remains unanswered for now and seems strangely unimportant in light of what happened. The fact that Hiroki Kuroda, a tough competitor whose tenacity inspires his team, is well enough to even ask the question is infinitely more important.