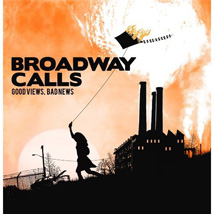 Broadway Calls are big fans of Green Day, who have greatly influenced their sound. While the trio isn’t a Green Day knock-off, they display some of the same talents as their heroes, especially on the sparkling power pop of “Election Night.” The song has a powerful vocal hook that rains down on the listener like the good-times-a’-comin’ emotion of an election night landslide, made all the more joyful by a barrage of carefree ringing guitar.

Just about everything here is fast and positive, but Broadway Calls prove they’re equally adept with slower numbers with the hopeful closer “At the End.”