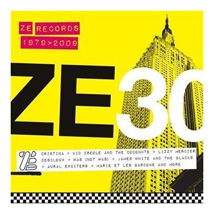 Berlin-based Strut’s specialty is issuing compilations, and this nod to Ze Records on the occasion of the label’s 30th anniversary is a good one. The bulk of the tunes here come from the early ’80s when Ze was the darling of the New York club scene; Was (Not Was), Don Armando’s Second Avenue Rhumba Band and Kid Creole and the Coconuts are a few of the artists that scorched the dance floor then that still sound good today, as does the comp’s longest cut, “Bustin’ Out (Seize the Beat Version)” from Material with soul-shouter Nona Hendryx at the mic.

Ze’s “No Wave” artists are represented, too. Groundbreaking synth/noise duo Suicide contributes “Dream Baby Dream,” while Suicide member Alan Vega also offers the hiccupping rockabilly of “Jukebox Babe.” Notably missing from the compilation are the Waitresses and Lydia Lunch, but quirky classics like the sax-laden “Contort Yourself” from James White and the Blacks keep the fun moving.

Ze is attempting a rebirth, and if the included psych-rocker “What Can I Do for You” by Michael Dracula is any barometer, the label is poised to reclaim its hipster status.