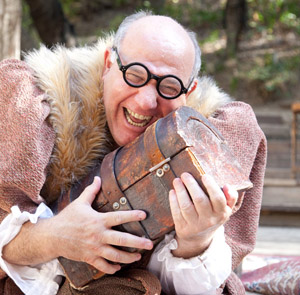 In Molière’s “The Miser” at the Theatricum Botanicum, the laughs are mostly forced by the sheer ridiculous sputtering of Alan Blumenfeld in the lead role of the scrooge Harpagon. The actors aren’t quite sure in what century or country their accents should originate, but the codpieces and playbill suggest the French Renaissance. Chad Scheppner, as the disguised prince Valere, and Mark Lewis, as La Fleche, take different approaches to the comedy, and both succeed.

Director Ellen Geer writes original songs for a musical that isn’t a 17th century French farce, but she inserts them into this one. Even though some of the more sincere moments come from her lyrics, the songs are distractions from her task and help run the clock past 140 minutes.

After smooth beginnings, the intermission derails the show, and you will know the last half hour by its clarion of hysteria.