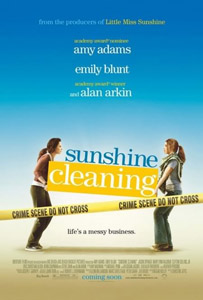 Amy Adams and Emily Blunt star as dysfunctional sisters who start a crime scene clean up service in the darkly quirky Sunshine Cleaning. Along for the ride are the always en tertaining Alan Arkin and Steve Zahn.

Johnny Depp stars as an unscrupulous rare books dealer in Roman Polanski’s The Ninth Gate. Taking the form of a noir, the film follows Depp on his search for an ancient manuscript, which can summon the devil. He soon becomes embroiled in a supernatural conspiracy. The camerawork and art design are meticulous, perfect for HD. Included is a commentary by Polanski.

Everything ’80s is being remade right now, so it’s the perfect time to delve back in with the Teenage Mutant Ninja Turtles Collector’s Edition. In honor of the 25th Anniversary, the first three live-action films are collected, plus the latest film, TMNT. Also included are temporary tattoos and four turtle masks. Radical!

Everyone’s favorite serial killer returns in season three of “Dexter.” The great Michael C. Hall stars as a murderer who puts on an affable face as a forensic scientist in the Miami PD. He uses his firsthand knowledge to get into killers’ heads, while venting his urges on those who beat the system. It deftly balances drama with black comedy.

The Diary of a Nobody is a feature-length adaptation of the classic British comic novel, done in the style of a one-man show. Hugh Bonneville is pitch-perfect as Charles Pooter, a would-be “somebody,” who voices his idiotic schemes in the form of a diary.

Legendary Polish filmmaker Andrzej Wajda returns with the harrowing Katyn. Nominated for an Oscar, the film tells the story of the German invasion of Poland, the ordered murders of the Polish officer corps and the decades-long cover up.

Monica Potter and Tony Goldwyn star in the surprisingly effective remake of Wes Craven’s The Last House on the Left. Three sociopath fugitives kidnap a pair of girls and leave them for dead, only to later wind up at the house of one of the girl’s parents. It’s an intense, gruesome thriller with some solid performances. “Deadwood”’s Garret Dillahunt is especially creepy.

Becoming the longest running primetime series in TV history this year, “The Simpsons” shows no sign of slowing down. Fan favorite Comic Book Guy graces the cover of The Complete Twelfth Season. While the show began to rely a little too heavily on cameos (Justin Timberlake, Roger Daltrey), there are still some classic episodes here, including Bart’s stint in a boy band.

Cartoon Network’s “Total Drama Island” is a hilarious reality show parody about 20 teens stuck in a rundown summer camp who must undergo intense, humiliating challenges to win $100,000. The clichés are ripe for the lampooning. The Complete Series is currently available.

Several new anime series arrive on DVD: Darker Than Black: Volume 6, an anime about supernaturally gifted assassins for hire; Romeo x Juliet: Juliet Collection, Part 2, an updated tale of the feud between two families and the star-crossed lovers caught between it; and UFO Ultramaiden Valkyrie: Season 3 & 4.