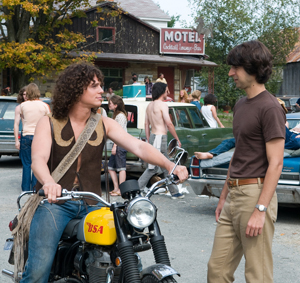 Taking Woodstock, Ang Lee’s latest film about the accidents, desperation and missteps that led to the 1969 generation-defining concert, shares certain key elements with Cameron Crowe’s Almost Famous. They both chronicle the power of music to band and unite, or tear asunder, each illuminates a generation through rock ’n’ roll and both are responsible for introducing a rapturously captivating star.

Woodstock’s Kate Hudson, the actor audiences streamed out of the theater asking, “Who was THAT?,” is Broadway darling Jonathan Groff as Woodstock organizer, Michael Lang. While some know Groff from his Tony-nominated turn in “Spring Awakening,” a role that earned him a cultish following, after Woodstock he might well have to leave Broadway behind for Hollywood’s A-list.

The week Groff, whose only other major screen credit was a recurring role on “One Life to Live,” left the cast of “Spring Awakening” (a moment that’s been deified on YouTube), he got a call to audition for Woodstock.

“I put myself on tape, which actors do all the time,” Groff explains with a gentle, soothing benevolence.

“There’s this little digital camera and you put yourself on tape, and it goes away to the universe and you never hear anything again,” he offers, laughing. “I got a call, literally, two hours after the audition from my agent. He said, ‘[They] loved your tape and fast-tracked it to Ang. He needs a couple of days to think about it, but he thinks that you’re the guy.’”

A few days later, without so much as a face-to-face meeting with Lee, a gobsmacked Groff was officially cast to play the intoxicatingly beatific Lang, an aura he shares with the character, though he might not realize it.

“I was so nervous,” he sighs. “I had never done any sort of movie before. Ever.”

But any anxiety Groff had was alleviated by his director. The pair’s first meeting lasted over three hours, and by the end, Groff says his fear had “literally melted away. Ang’s such a nice guy. He’s so unassuming, humble and ego-less. He puts you at ease the minute you shake his hand. The first thing he said to me was, ‘I know this is your first film. I’ve done a lot of people’s first films, and you have nothing to worry about. I’m going to hold your hand through this process.’”

But handholding doesn’t equate to coddling on an Ang Lee set. Before Groff left the meeting, Lee handed him a four-inch, three-ring binder of research that included articles, history, photos, three books, 15 movies and about five mix CDs from the time period. Then came what Groff describes as “the work sessions,” where he, Lee and Demetri Martin, the film’s star, also in his first major role, would read and rehearse their dialogue.

“Ang would sit a couple of feet away from me and just stare at me,” Groff recalls. “I’m trained in the theater so we express a little more to reach the last row of the balcony. Ang would say, ‘OK, you don’t have to show me so much. If you’re feeling it, I can see it in your eyes.’ Just incredible lessons that you’re learning from this master.”

It’s hard to tell if the love-in vibe Groff exudes is because of his own unshakable good nature or the film’s time period, but his fondness for the film’s set is palpable when describing his director.

“Ang’s actually a lot like Michael Lang; he’s the leader that’s very quiet, doesn’t raise his voice and everyone instinctively just wants to please,” he says, his voice filled with reverent admiration. “You’re doing a movie with Ang Lee, so you feel comfortable and confident to just throw your hands in the air and do whatever he asks you to do because you know you’re working with this incredible artist.”