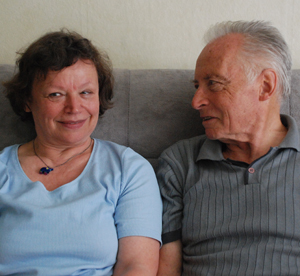 Cloud 9 is the story of Inge, a seamstress who delivers a pair of pants to a client one day and falls madly in love with him. At first, it’s just passionate sex, but then the two find out they have a deeper connection. The only problem is that she’s married, and has been for 30 years.

And that’s about where you should have to do a double take. That’s right, Cloud 9 is about a trio of 60-some-odd year olds falling in and out of love with each other. Oh, right, and the sex.

There really is a touching story and spectacular drama in the film, but it’s slow to get there, and you have to peel back the episodes of intercourse to find it. In and of itself, that wouldn’t be a huge problem, but in some ways, seeing two German 60-year-olds naked is slightly terrifying, and with two sex scenes in the first 20 minutes alone, it just feels overdone.

Luckily, the acting is good enough that you can feel the electricity of each encounter. You get the feeling that these people could be teens if they just weren’t so old.

Cloud 9 also has great cinematography, but it’s done in a cinéma vérité style that makes the film just drag. There are parts where you can really feel that a little bit of music would help the scene get where it’s trying to go, or that some places could have been cleaned up a little to tighten everything up.

So in the end, the frequency of the sex and the participants’ ages isn’t the film’s real problem – it’s that the pacing of the film makes it such a chore to get through. Of course, it’s supposed to look like real life, but sometimes, reality needs a soundtrack.