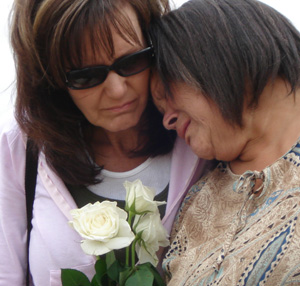 Motherland: a journey of hope and healing

Were it shaped differently, Motherland could have been a story of minor schadenfreude, or even cliché, in which those who’ve lost loved ones suddenly find comfort in what fortunate lives they’ve got remaining, next to those who’ve lost loved ones and have little in the way of material comfort. Instead, it finds unexpected love in the period after loss, but acknowledges that grief never completely disappears.

The subjects include six American women, mostly based in California, who’ve all lost a child (or, in the case of Oakland’s Lauren, a brother) aged into the teens or twenties. Some were lost to car accidents, others to bullets fired; perhaps the most difficult image is that described by San Francisco mother (and Motherland co-producer) Anne Magill, who’d found her daughter, Grace, face-down in bed after slitting her wrists and stabbing her own neck after a New Year’s Eve party.

When these women wind up in Oudtshoorn, South Africa, hosted by a mother who’d lost her own daughter and raised her granddaughter as her own, they are given the task of helping impoverished children get through their own grief over parents suffering from or lost to HIV and AIDS. In turn, the shifted focus is to help them discuss their own children and assist them in their own grieving process.

But while these women help the children open up through positive outlets like dance and open discussion, they are always aware that these kids are coming to class to receive their single, modest meal of the day, and that while the kids remind them of the small children they’d once raised, the kids in front of them likely have no one to comfort them.

But the South African lifestyle – simple, finding significance in nature, community and life – is a contrast to the lifestyle back home for these women: the SUV decorated with an American flag, the suburban neighborhood, the upper-class San Francisco home. For all its collective grief and lack, the population of Oudtshoorn looks happy.

Still, it’s difficult to forget the look on Kathy’s face when she explains that she’d lost a son she’d tried to have for seven years, or Mary Helena’s, worn from a recent stroke and heavily withdrawn from the group, when she says of her relationship to her son, who’d been shot at 15: “I used to describe myself as a mother. I don’t know what to say now.”