Back From the Past: Childhood Favorites Make a Comeback 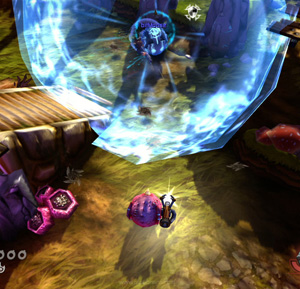 College life may be the gateway to a family, a career, kids and all the other staples of adulthood that we all either strive for or dread, but that is no excuse for forgetting how great it was to be a kid. We like to claim that we have graduated to bigger toys like cars, but the fact is that even the most serious college student has a favorite toy that still occupies a soft spot in their heart.

Unfortunately, nostalgia sometimes comes at a cost. With each new remake, we run the risk that someone could skewer our beloved childhood memories. After all, for each Iron Man that we see in movie theaters, we have to put up with three Star Wars prequels.

Fortunately, some game developers know this and are careful to capture the items and experiences that we grew up loving while still making a more modern game that everyone can enjoy.

For a real blast from the past, those who grew up in the ’80s will probably remember the gross-out classic Madballs. These nasty little foam balls featured faces that only a Garbage Pail Kid could love, but many of us clamored for these soft projectiles shaped like demon faces or giant, gooey eyeballs. Somehow, this seemingly timeless boys’ toy disappeared, but the memories never could.

With the introduction of “Madballs in … BABO: Invasion” for the Xbox Live Arcade, players can rediscover these grinning, gross orbs in a genuinely enjoyable top-down shooter. While the game has a very strong storyline, it is only natural that this collectable-inspired game is all about unlocking and collecting new Madballs and power-ups.

Even the intense multiplayer mode rewards successful combat with collectables, rewarding dedicated players. All in all, it is just a fun shooting game with a cartoonish – if still disgusting – alternative to bloodshed.

For fans of classic adventure gaming, August has been the month of Monkey Island. This LucasArts silly swashbuckling saga is swinging back onto consoles in both an amazing remake and a new, episodic adventure and both are guaranteed to thrill old and new pirates alike.

“The Secret of Monkey Island: Special Edition” brings Guybrush, LeChuck and the rest of the wacky, pirate-themed cast from the original game back with a gorgeous graphical makeover for the Xbox 360, PC and iPhone. Between the updated controls, the newly-renovated graphics and the addition of voice acting from some of the series regulars, this title is true to the original while overcoming much of the original design limitations. For the purists, you can also toggle at any time between the new and original interfaces.

Once you have experienced Guybrush Threepwood’s beginning in “The Secret of Monkey Island,” you can catch up with his new adventures in “Tales of Monkey Island” for the PC and Wii. “Tales” picks up the tale from years after the 2001 “Escape from Monkey Island,” with a far more successful pirate captain Threepwood in yet another struggle with his arch-nemesis, LeChuck. Things predictably go awry during the rescue attempt, launching Guybrush and his newly possessed hand into a new series of comical misadventures.

“Tales of Monkey Island” does an amazing job of updating the graphics and storyline while keeping the charm and wit of the original games. The point-and-click gameplay may have fallen out of favor, but you cannot argue with the giggles you will have trouble fighting back by the cast of silly sea folk and their quirky interactions. Ultimately, Telltale Games has succeeded in turning another LucasArts cult classic into a vibrant, purely enjoyable episodic adventure.