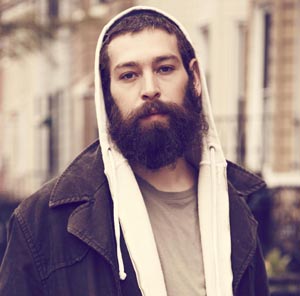 A little groggy on his fourth cup of coffee, clinking dishes in a New York kitchen, Matisyahu describes the incredible time difference between there, and where he just arrived from – Australia. He was out touring in support of his newest album, Light.

Matisyahu is a sprightly emcee who has been blending Hasidic Judaism with dancehall reggae since his emergence in 2004. He reached No. 1 on Billboard’s Heatseekers Chart after the release of Live at Stubb’s in 2005, with Youth reaching No. 4 on Billboard’s top 200 at its debut the following year.

Youth hit No. 1 on the Reggae Albums chart, gaining some serious critical acclaim by blending Orthodox Judaism and reggae, introducing holy purpose to music – like Bob Marley – at a time when spirituality was necessary in a hardened mainstream. Youth was nominated for a Grammy in 2007 for Best Reggae Album.

With tons of hype already in store from 2008’s Shattered EP, his extensive multi-national summer tour, Light’s high-profile collaborations and the Where’s Matis At Initiative (wheresmatis.at; his interactive social media space), his recent release should be well-received. Light is the most personal record Matisyahu has done, having a darkness to it he describes as “internal struggle and strife that comes from Jewish source, but can almost feel like it has a lot of eastern themes to it. A lot of ideals, emptiness within, allowing oneself to be with oneself.”

“I collaborated with Good Charlotte on the song ‘Darkness Into Light.’ It was a random thing, really … someone told me that they were fans and wanted to meet me, and I popped in the studio,” recalls Matisyahu.

The artist is the most regular, extremely irregular kind of individual, which can be easily noted from his calm and gentle demeanor and his brandished yarmulke, black suit and overgrown beard. The album has a story unto its own, opening up in new directions with the addition of each new fluid whim.

“We would decide on a live rhythm section, so let’s have Fishbone do this session because they’re the best at that style. Then we decided we wanted to go to Jamaica,” he notes, “so we looked up Sly & Robbie.”

That seems like the most logical move – right? Head to Jamaica – where reggae and rocksteady developed – to find one of reggae’s most prolific and long lasting production teams and also get them to collaborate on the creation of the songs themselves.

“We got Robbie to play bass on ‘I Will Be Light,’ then we worked with this kid Stephen McGregor who is a really great producer out of Jamaica, on ‘Smash Lies’ and ‘Motivate,’” he says. “It was really cool because in general I got to collaborate with people whose music I really respect and who come from different visions, different styles. There was so much variation, which I think speaks to who I am as an artist and the kind of music that I like – I like to listen to a lot of different things and hear myself doing a lot of different things.”

On tour now, the Matisyahu RV will be reaching 35 cities. They’ll be “inviting fans on board all along the way” and Twittering their locations, along with a GPS tracker and interactive map at wheresmatis.at.

Matisyahu’s latest Tweet: 08-19 1:38 p.m. “There are limited spots in the coffee house for this free performance. If you are in the area and want to come, hit me back.” Don’t let a coveted thing pass you by, take note of his coordinates.

Social media is an integral part of maintaining and building relationships with fans, increasing visibility into the “real life” of an artist, as well as providing an avenue for which to connect and understand them.

Matisyahu says, “The idea is to be able to reach people and to communicate with people. For me, Twitter has been a way for me to tap into how people feel about my music. When you’re out there playing shows every night, or doing press or traveling on planes or on the bus, sometimes you just forget that there are people that are being affected by your music. Then I’ll go and read my Twitter messages, and I’ll see that people are really touched by my music. It really affects me. It changes the way I behave because there exists a new responsibility to the people.”

With his level of self-cultivated spirituality and mental fervor, Matisyahu is heading down what was before, very uncharted territory. He’s essentially become an incredible spokesperson for his fans, representing them in society, propagating Jewish culture while making it mainstream.

His religiosity is an outstanding demonstration of faith and a testament to his mental and spiritual strength, uniquely since Matisyahu was not born into an Orthodox Jewish family. Religion was a blessing for him he later found, at age 22.

“Religion helps me stay focused – I don’t really know if I could have a music career if it wasn’t for that. It helps me go out onstage and have fun, and be with my band who is not Jewish, or religious,” he shares.

Matisyahu encourages you to keep talking, reaching out and to say “hello” when he’s coming through your town on the Matis bus.