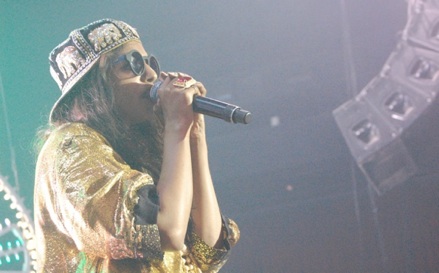 L.A.-based noise rock group Health is about to release a new album called Get Color, and some purchasers of the CD will win prizes. Playing off the name of the album, the group has handcrafted 66 color-coded prize-winning “tickets” that’ll be inserted at random in the first flight of CDs. The person who finds the gold colored ticket will be the big winner and will receive a three-day Los Angeles adventure wherein they’ll hang out with the band as they visit places like Magic Mountain. Airfare will be provided if the winner lives outside the immediate area.

The other 65 prizes include some cool things such as concert tickets, meet-and-greet opportunities, autographed vinyl and T-shirts as well as some absurd things like a childhood toy, band member fingerprints and a scarf knitted by a band member’s mother. Get Color drops Sept. 8, and Health brings their experimental sound to the Troubadour Sept. 9.

Who Are Heavy Young Heathens?

According to the band, here are a few things that they are not: They’re not blond, vegan or foreign (They’re from Los Angeles.). They have not dated Winona Ryder, and they don’t know Madonna or A-Rod. They don’t “buzz,” and they don’t have iPhones.

They do rock hard enough to have their single “Sha La La La” at the No. 1 spot on FMQB’s Alternative Specialty chart though – no surprise if you know that Heavy Young Heathens are in fact the brotherly duo of Aron and Robert Mardo, formerly of noteworthy band Mardo. So really that thing about not “buzzing” is a bit of a fib. Make the drive to Solana Beach’s Belly Up Tavern Aug. 31 and find out for yourself.

You can download a sampler of SideOneDummy recording artists absolutely free at the label’s Web site. Included in the package are songs by Anti-Flag, Broadway Calls, Chuck Ragan, the Casualties, Fake Problems, Big D and the Kids Table, Nathen Maxwell of Flogging Molly and many others.

What’s more, SideOneDummy has cleaned out their closet and found a bunch of test-pressings and T-shirts that they want to get rid of, so everyone who downloads the sampler will be automatically entered to win the highly-collectible goodies and random seven-inch singles. Info on all the freebies is at sideonedummy.com.

The title of Chris Ayer’s new album sounds like it could belong to a slasher film. To the contrary, the 2006 John Lennon Songwriting Contest award winner works in a field that’s not too scary, unless you consider pop-rock horrifying. Ayer explains that Don’t Go Back to Sleep is simply a reminder to avoid slacking off.

“This group of songs has really become a collective note-to-self on how I want to live,” the singer says. “They were all born out of moments where I was going along in my day-to-day life and something shook me out of the autopilot rhythm and reminded me that I better open up and dig in right this second.”

Ayer probably won’t need that autopilot to find the Mint either; he plays there Sept. 2.

The Crystal Method has teamed with Indaba Music to launch a remix contest for the duo’s latest single, “Come Back Clean.” Prizes include a mini Korg synthesizer, Skull Candy skate decks, headphone sets and autographed copies of the Divided By Night album. Remixes need to be submitted by Sept. 8, and entrants can find the song stems and contest details at indabamusic.com.