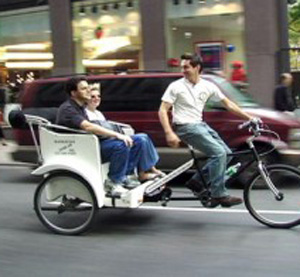 Once a New York-based outlet for founder Brendt Barbur’s love of bikes while recovering from being hit by a bus, the Bicycle Film Festival is now a 39-city internationally-touring, bike-themed party. For the next five days, it’s taking over Los Angeles with a concert, art exhibition, five feature-length films and a slew of shorts.

When Barbur decided to bring his NYC film fest to the movie capital of the world in 2005, the L.A. bike scene was still in its infancy. The Bike Kitchen was in an unused kitchen at Eco-Village, the Midnight Ridazz were riding weekly from Pioneer Chicken in Echo Park and parties in Silver Lake had pitiful bike attendance. But over 1,000 people showed up to the Vine Theatre to watch movies about every facet of bicycle culture, and Barbur realized he was onto something.

Four years later, with a Wednesday night concert featuring Long Beach locals Blank Blue opening up for Deerhunter at the Eagle Rock Center for the Arts, a Thursday night bike-themed art exhibition opening across the street from Orange 20 on Melrose Avenue and the weekend movie screenings at the Downtown Independent Theater, BFF LA is still uniting riders from all corners of our sprawled out city.

The film lineup and associated festivities are tailored to each city, and this year Los Angeles is blessed with one of the more well-rounded combinations of movies. There is a short about L.A. bicycle co-ops, one about this past June’s Wolfpack Hustle All City Team Race, another full of Nintendo’s “Paperboy”-esque computer graphics and an instructional video about how to play bike polo.

With an afterparty every night and events that are as much educational as they are entertaining, the Bicycle Film Festival is a must for anyone who wants to prove that L.A. bike riding is not an oxymoron.