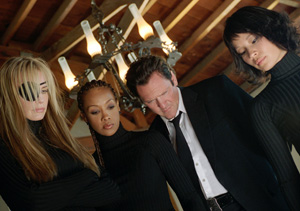 A Kill Bill prequel could imagine how the Deadly Viper Assassination Squad came to be.
(Credit: Miramax)

Seeing how Hollywood is addicted to sequels like Halle Berry is addicted to crack in Jungle Fever, I thought I might offer my services and come up with some of my own sequels. I have selected five films and picked five directors, and I’ve also provided the “what ifs” that give way to the magic of storytelling.

Every now and then filmmakers decide that the story preceding their original story would be more interesting and would be better than the one that would come after it. Even though the new film takes place before the old film, it’s still technically a sequel.

If I had to prequelize something, I’d prequelize Kill Bill. The late great David Carradine’s Bill, who was masterfully written by Tarantino, is set up so mythically, that one can’t help but imagine how this man came to be and how he formed the Deadly Viper Assassination Squad.

Obviously, the only person who could make this film would be Tarantino.

What if Peter Fonda’s Wyatt and Dennis Hopper’s Billy both unknowingly knocked up a couple girls and had illegitimate children they didn’t know about before they set off on their bike ride into the sun? Suppose Wyatt Jr. and Billy Jr. stumbled upon each other, became friends and decided to take a motorcycle road trip like their fathers did? It might be interesting way to juxtapose 1969 with 2009.

My director pick would be Terry Gilliam (Fear and Loathing in Las Vegas, The Brothers Grimm).

The obvious choice is to bring John Travolta’s Sean Archer character back and have him switch faces with someone again, but that would be too easy. If it were up to me, I’d have Archer be leading some sort of operation where other peoples’ faces got switched, and to ratchet up the stakes, have more than two people’s faces get swapped – like maybe three or even four.

For director I’d bring back John Woo, who directed the first one.

At the end of Natural Born Killers, it’s set up that Mickey and Mallory ride off into the sunset and have a child. But then what? How are two serial murderers going to raise a child? And for that matter, what is the child going to be like? The answer to those questions would probably make a pretty awesome film.

In the director’s chair I would bring in Quentin Tarantino who actually wrote the original draft of the first movie only to have Oliver Stone and the producers deviate from his script. It would give him a second shot at the characters, and when you really think about it, who better than Tarantino to tell that story?

To me this is a no-brainer. Network was way ahead of its time because it forecasted almost exactly where the broadcast news has ended up. Nowadays, the news is literally theater itself and very similar to what the movie suggested it would be in the future.

What would be interesting is to see some of the characters from the original film like Faye Dunaway’s Diana Christensen come back and see what they think about the environment they helped to create. At the same time the film could make some predictions of where things will continue to go from here and in another 30 years make a Network Part III. Come to think of it, there should be an entry made into the Network series every so often just to see where things are.

I would bring in master filmmaker Christopher Nolan to helm this one. He’s been doing a lot of action and suspense lately, so sinking his teeth into a straight drama would be interesting to see.