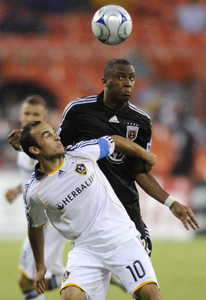 After two games in Chicago and Washington, D.C., the Los Angeles Galaxy managed to collect four total points out of the possible six.

Los Angeles, who are now 8-4-11 with 35 points and in second place in the Western Conference, captured an impressive 2-0 victory over the Chicago Fire Wednesday without midfielders David Beckham and Eddie Lewis, who were out because of suspension.

Mike Magee and Landon Donovan each netted goals. Donovan’s score, which Magee assisted on, was his team-leading 10th goal of the campaign.

The team then headed to Washington, D.C. Saturday and earned a scoreless draw even though they had Beckham and Lewis back on the field. With the tie, D.C. United remained as one of two teams that are unbeaten at home.

With an expected full stadium, the Galaxy are scheduled to host Chivas USA in the SuperClasico Saturday at the Home Depot Center at 8 p.m.