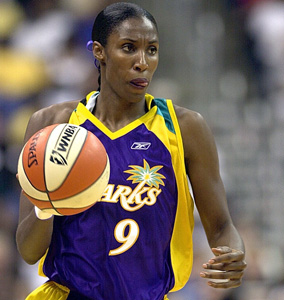 Lisa Leslie and the L.A. Sparks secure their No. 3 spot in the west.
(Credit: Jennifer Hack/KRT)

The Los Angeles Sparks solidified their playoff positioning and moved within two games of the Seattle Storm for second place in the Western Conference, thanks to a recent five-game winning streak.

With a 13-13 record and holding a two-and-a-half game lead over San Antonio, the Sparks have seven games remaining in the regular season to clinch a playoff berth. Five of those seven matches are against Western Conference foes, all jockeying for playoff positioning – their final four games include a home-and-home series with San Antonio (11-16), a home game with Minnesota (11-16) and a road game in the season finale against the Sparks’ potential first round opponent at Phoenix (18-9).

The Minnesota Lynx are currently battling with San Antonio’s Silver Stars for the final Western Conference playoff berth, while the Phoenix Mercury are trying to finish with the league’s best record to secure home court advantage throughout the playoffs.

The Sparks play their next three games at Staples Center, including contests against Phoenix (Aug. 27), Connecticut (Aug. 30) and Atlanta (Sept. 1).