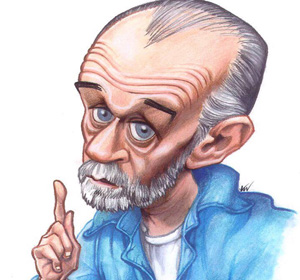 It took the sharp wit of comedian George Carlin to help me see the light on this one.
(Credit: Tim Van Ness/St. Paul Pioneer Press)

As pitcher Hiroki Kuroda lay motionless on the mound Aug. 15 after being nailed in the head by a 120 mph comebacker, thousands of viewers in the stands and at home were left speechless. Clearly disturbed by what he had just seen, Dodger announcer Vin Scully spoke few words as the scene unfolded.

Privately, Scully was anguishing over the thought that Kuroda’s family was watching. Indeed, Kuroda’s wife was watching and worrying that her husband had died on the spot. It was a moment of fear and helplessness among all who were present, a sudden awareness of the fragility of life.

“If you are so inclined,” Scully offered, “now would be a good time to offer a prayer for Hiroki and his family.”

The suggestion of prayer at a time when everyone watching shared in a sense of powerlessness and deep concern for Kuroda was both poignant and gracious. For it appealed to what is best in us, the concern for another’s well-being.

That sentiment is not the normal MO of most baseball fans. Remember, baseball is a game of intense partisanship. When fans usually pray during a game, they do so shamelessly in vain, pleading that the Almighty should bless their own team and curse the opponent.

What people do in the privacy of their hearts is, of course, their own business. For this reason, I am continually vexed by the new tradition of singing “God Bless America” in the seventh inning just before “Take Me Out to the Ball Game.”

First introduced at Yankee Stadium in the days following the events of Sept. 11 during a time when the city was traumatized, the ritual soon spread to nearly every ballpark, and today it has become standard practice. Now I don’t object to the music or even sentimental feelings towards one’s country of birth, rather it is the specific refrain “God Bless America” which sits funny with me.

It took the sharp wit of comedian George Carlin to help me see the light on this one, with his simple questions regarding the meaning of the slogan. Is it a plea, a demand, a suggestion, Carlin asked aloud in his routines. And when requesting that the All-Powerful bless one nation, why not ask that He bless all nations?

My point is really that as a great American pastime baseball should be for everybody, believers and non-believers alike. The practice of singing “God Bless America,” however well-intentioned, ends up alienating people who don’t share the religious faith of others, dividing rather than uniting.

Seeing Kuroda lie sideways on the ground brought believer and non-believer together in common concern. To learn that he is alright and he’ll soon be pitching again, I don’t mind saying, “Thank God.”