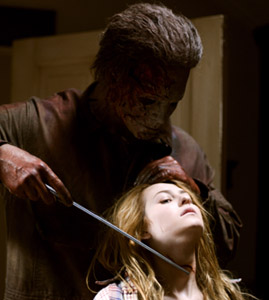 Rob Zombie has built an entire career out of his fascination with morbidity. After a decade-long run as frontman for White Zombie, a heavy metal band whose music dealt almost exclusively with gruesome fantasies, the widely successful recording artist channeled his love of the morose into directing horror films.

“I remember when I was in high school, going to see Dawn of the Dead, and it was like mayhem in the theater,” the director recalled of his virgin experience with the horror genre. “You could barely even watch the movie.”

After the dual success of his House of 1000 Corpses and its 2005 sequel, The Devil’s Rejects, the writer/director was hired to create the next installment in the Halloween franchise. Fans embraced Zombie’s reimagining of the classic story, especially his decision to delve deep into the psychology behind the homicidal Michael Myers.

“When I finished the first Halloween, I was burnt out, exhausted and never wanted to hear the words Michael Myers again,” Zombie admits.

It was the characters, however, that made Zombie rethink his decision.

“I started getting possessive about it,” Zombie recalls. “It was my Michael Myers, and my Laurie Strode and my world. I didn’t want someone else taking charge of it.”

H2 picks up where the original left off and examines the damaged relationship between Laurie and her brother Michael. The director’s decision to focus on his characters’ backstory provides a more dramatic tone than your typical C-grade slasher epic.

The inspiration for H2 came in the character of Laurie. When writing the film, Zombie strived to make her a complex personality who struggles with the possibility of her own diminishing sanity.

“I did not want her to be just another girl being chased,” Zombie says of his protagonist, played by Scout Taylor-Compton.

Zombie had a similar vision for Michael’s character. Through much of the film, he relinquishes his trademark mask. According to Zombie, Tyler Mane’s performance as the silent yet sinister Michael Myers was far too expressive to be concealed.

“Tyler has such an intense face,” the director enthuses. “When he would put the mask on, I’d think, ‘Now I’m just looking at a mask.’ This time, he doesn’t wear a mask a lot because his face is more intense.”

Zombie’s reimagining also extends to the character of Dr. Loomis, reprised by English actor Malcolm McDowell. Loomis is portrayed as an egomaniac who capitalizes off the tragedy by writing a tell-all book.

“This horrible event happens, and he finds a way to cash in big time,” Zombie explains. “But it all comes crashing down.”

In his effort to expand on the original Halloween, Zombie took a page from his musical past and added a terrifying supernatural element to the sequel. The character of Deborah Myers, played by the director’s wife Sheri Moon, exists entirely in the mind of her son, Michael. She appears atop a white horse in several dream sequences throughout the film, thus adding a layer of psychosis to her already-damaged son.

If Rob Zombie set out to re-imagine the classic story of Michael Myers, then connecting his characters through tragedy was the completion of his vision.

“They’re all survivors, and I wanted to play it realistically how they would all deal with it,” Zombie says. “Because in the end, everybody deals with these events differently.”