The Postmarks: Memoirs at the End of the World 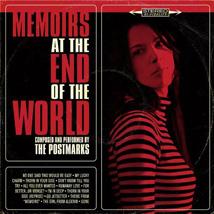 Memoirs at the End of the World is rich with alien-esque keyboards, jazzy saxophone and Spanish guitars. The vocals keep the songs calm and almost lullaby-like, while the instrumentals bring forth a dramatic flair, one that is engendered partly by climactic violin pieces, particularly seen in the lead track “No One Said This Would Be Easy.”

In addition, there’s a Pulp Fiction vibe lurking in the background of this album. It maintains a cool composure, but you can hear little hints of danger and excitement within it. Specifically, this album reminds me of the scene where Uma Thurman sings along to “Girl, You’ll Be a Woman Soon,” while she risks her life by giving in to the temptations of cocaine, and John Travolta fights against his urges to be an adulterer.

Take a cue from Quentin Tarantino and embrace your love for subtle and mellow, yet dangerous, musical thrills.

Memoirs at the End of the World is currently available.