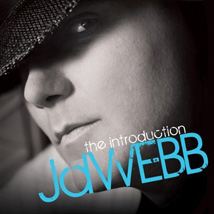 Webb was primarily known as a songwriter until he made a splash on national radio last year with of all things, a Christmas song. Webb has a smooth vocal style that’ll attract some fans of acts like Justin Timberlake and Rob Thomas, and much of The Introduction falls into the same ilk as the music performed by those two stars.

Webb is going to have to dig a little deeper to compete with the big boys though, or maybe get a better producer as the studio work here leaves many songs sounding very demo-ish. There’s no arguing that Webb has an attractive voice, especially when he varies his sound a little like he does for the Memphis soul-inspired “Falls Apart.”

But there are way too many moments here amongst a whopping 18 tunes where the hook fails to take off or where Webb has to compete with out of place background singers doing their shoop-shoops. It sounds like Webb has just thrown everything he has out here with the hope that something will stick, and in doing so, does himself a big disservice since he’s clearly loaded with potential.

The Introduction is currently available.