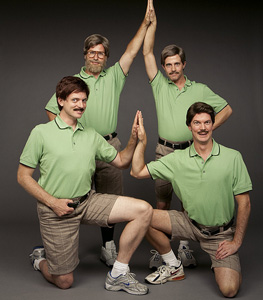 Stephanie Courtney, the lone female of the Groundlings crew Aug. 14, stood out with her hilarious impression of Miss Garrett from “The Facts of Life” and her three go-rounds in all of the improv parts. There was also an abundance of all-male humor, including a sketch revolving around diehard Kobe Bryant fans and one in which a conservative, all-guys group auditions for “America’s Best Dance Crew.”

Kevin Kirkpatrick and Jeremy Rowley are absurdly silly as gay partners called into the principal’s office for a parent meeting. Director Mikey Day is one of the funnier Groundlings cast members, and it shows in this very funny string of skits.