State of Play is Released and More 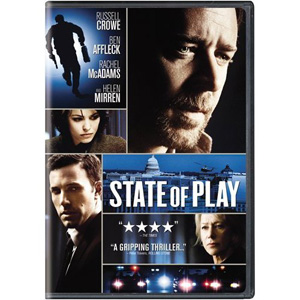 For State of Play, director Kevin Macdonald (The Last King of Scotland) assembled an all-star cast including Russell Crowe, Helen Mirren, Ben Affleck and Rachel McAdams for this remake of the dense British miniseries. Michael Clayton scribe Tony Gilroy co-wrote the solid, smart script in the vein of political conspiracy thrillers of the ’70s.

Gilroy’s follow-up directorial effort Duplicity stars Julia Roberts and Clive Owen in an attempt at a light espionage adventure. It comes off as a bit of a stretch for the writer of such intense thrillers such as the Bourne series.

David Duchovny returns in the hit Showtime comedy “Californication” as a one-hit wonder novelist eking out an existence in Los Angeles while seducing anything that moves and trying to patch up things with his ex and tween daughter. The second season opens with the premise apparently resolved, but things are rarely that simple in TV Land. It’s a ludicrous yet highly watchable comedy. If only it didn’t try quite so hard…

Linda Hamilton stars in this 1984 adaptation of Stephen King’s Children of the Corn, a staple of the creepy homicidal kid subgenre. A couple arrives in a small town where there are no adults and the children worship an evil force in the corn stalks.

Trouble the Water is a harrowing look at post-Katrina New Orleans focusing on a husband and wife who were residents of the decimated Ninth Ward. Utilizing footage shot by the couple (who refused to evacuate) the film was nominated for Oscar’s Best Documentary.

Fellow nominee The Garden tells a similar tale of a poor urban community vs. the Man. Following the L.A. riots, a neighborhood in South Central banded together to create the largest community garden in the country. But when a developer had other plans for the property, an epic political battle ensued.

The Da Vinci Detective, How Bruce Lee Changed the World, Art of War, Bring it On: Fight to the Finish starring Christina Milian