Extract: And You Thought Your Job at Subway Was Bananas 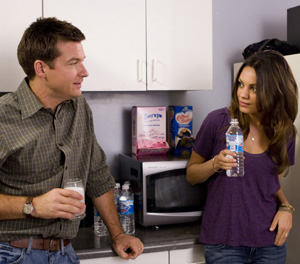 He is a master at comedy, a genius who will probably go down in history as the person who cleverly married socio-economics with humor. With his celebrated take on adolescence (“Beavis and Butt-Head”), his interpretation of middle America and its family values (“King of the Hill”) or his look at white collar office politics (Office Space), Mike Judge has made the nation laugh at itself like never before.

Judge is back with his latest contribution to the working class: Extract. The film stars Jason Bateman as Joel. He’s the owner of a factory that makes bottles and bottles of extract – a flavoring agent used primarily in desserts.

Within the cast of characters are the kind of slackers and fuck-ups whom you’d expect to uncover in blue-collar hell: bitchy, middle-aged women who hate the world and think that entitles them to be lazy; self-aggrandizing, hillbilly men who think they’re in charge of the women (in this case, Clifton Collins Jr.); a stoner (Ben Affleck); a wayward suburban housewife (“SNL”’s Kristen Wiig); a clueless neighbor (David Koechner); hapless gigolo Brad (Dustin Milligan); and a sexy grifter taking all these fools for everything they’re worth (Mila Kunis).

After a freak accident involving one of the male employees in the factory, Kunis’ bad girl makes a play for the victim by acquiring a job at the plant. There, she stirs up trouble by stealing, flirting and ultimately, instigating a lawsuit against Joel.

Meanwhile, Joel’s home life is just as unpleasant as work. His wife (Wiig) has refused him sex for a number of months. He’s looking for an excuse to have an affair of his own, so he hires Brad to seduce his woman. However, Joel gets even more than he bargained for when the ditzy man-whore develops “deep” feelings for his spouse.

It’s hard to imagine that two of the funniest men in Hollywood had never crossed each other’s paths in the myriad years both have been working, but in the case of director and star, it’s true.

“I didn’t know him previous to this project, but we share a manager. And our manager put us together for this project,” admits Bateman.

The actor does admit, however, that he “was a huge fan of Office Space.”

As for Milligan, who delivers a scene-stealing, breakthrough performance that is a far cry from his days on “90210,” the chance to be funny in a movie really captured him from the word “Go.”

“The whole process of crafting this character was a lot of fun because he’s just so stupid,” he explains.

For his role as Brad, Milligan dons a pouty expression, some blond highlights and a sleeveless hoodie to give him the look of a ’90s-era boy band member. However, the actor almost missed his chance to appear in Extract. An issue with his work visa (he’s Canadian) forced the filmmakers to hustle support and favors from politicians as well as the national immigration office.

Luckily, that diligence paid off, allowing Milligan to work with one of his comic heroes. For such a young performer (Milligan just turned 24), he’s very tuned in to the Judge style: “There was a little bit of improv, but the way Mike writes and the way he crafts stories – you don’t really need a lot of improvisation.”

Milligan even names Beavis and Butt-Head Do America as one of his all-time favorite films.

Kunis agrees: “‘Beavis and Butt-Head’ is something I grew up watching.”

She enjoyed working with the diverse cast and found a lot of common ground with her leading man.

Ultimately, it’s Judge who feels that he struck gold landing such a winning group of actors to guide on a daily basis. Although, he does admit that the casting process was a bit laborious at times.

“It’s like going on a horribly awkward date every five minutes for eight hours,” he says, laughing.

As for his reputation as Hollywood’s reigning comic Mad Hatter, Judge is either incredibly modest or terribly proud.

“I think there may have been some sort of a genetic thing,” he says, just before trailing off in a decidedly Hank Hill way.