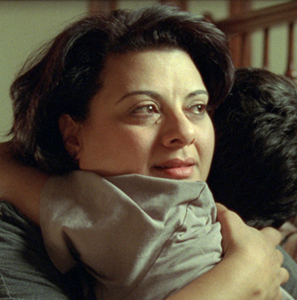 One evening as I was heading out the door to a screening, I noticed that the Sundance Channel was running a promo about this past year’s festival in Park City, Utah. The film that they were showcasing was called Amreeka.

I stood there watching as writer-director Cherien Dabis described her labor of love. They previewed a clip, and I found myself laughing out loud at it. I thought, “Yeah, I’d like to see that when it comes out.” Then I grabbed my keys and headed out the door.

Months later, I’ve screened this dramedy, and my verdict is in: It’s a keeper. Amreeka tells the story of Muna.

She’s a single mother living in the Middle East with her son, Fadi. Day in and day out, they endure the hell of militarized checkpoints, the monotony of work and living with Muna’s elderly mother. When a letter arrives notifying Muna that she’s eligible to go abroad to the United States, Fadi convinces her that the family should take a chance and move.

Oh, did I mention that all this goes down shortly after 9/11? Yeah. Not the greatest time to be Middle Eastern in this world.

They go to live with Muna’s sister, Raghda, her husband and three daughters in the Midwest. Soon, Muna and Fadi are struck with the realities of being strangers in a strange land and how the grass isn’t always greener on the other side.

This movie is charming beyond belief. I laughed when I was supposed to and could really sympathize with the struggles of each character.

I did take small issue with the Muna character. Sure, she’s an intelligent person, academically. But man was she dim on the personal tip. Still, if she weren’t so slow-witted, then half the movie would never have happened, so I guess it’s a fair trade.