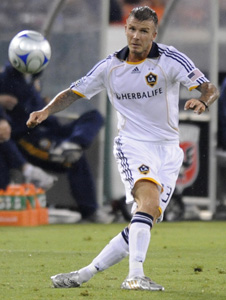 The Galaxy’s David Beckham scored on a right-footed shot from 25 yards out to lead the team to 1-0 triumph over Chivas USA in the SuperClasico before a sold-out crowd at the Home Depot Center Aug. 29.

“It was a well-earned victory,” Galaxy head coach Bruce Arena said in the post-game press conference.

With the win, Los Angeles has solidified itself as a true contender in the Western Conference. The Galaxy, who are unbeaten in their last three affairs, currently sit in second place with 38 points, two behind the leading Houston Dynamo (40 points).

“Once again, our team continues to make progress,” Arena stated.

Beckham one-timed a rebounded ball that sat in the air perfectly for his right foot. The shot took one bounce in the penalty box before hitting the left post of the goal and eventually landing in back of the net. It was Beckham’s first goal of the season, coming in more than one month after he arrived to the group from Italy.

“It’s always nice to score a goal and win a game, especially against your rivals. It’s a big game for us because we wanted to keep our momentum up,” Beckham told reporters in the locker room.