You're a Jerk: A new crowd is taking over the Skinny Jeans Movement. 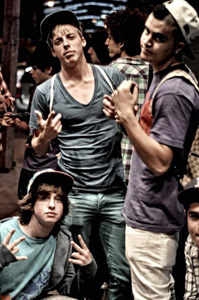 UCLA Jerk Kings are featured on “Skinny Jeans: The Movement.”

With their chart-topping, hit single, “You’re a Jerk,” Ben J and Legacy, a.k.a. New Boyz, have introduced a pop cultural sensation to the general public. But what exactly does the Jerk Movement entail? While dressed in ’80s, retro, skater clothes, “Jerks,” particularly in the hip-hop crowd, are making their own music, creating their own fashion lines and just dancing freely.

This movement is reclaiming hip-hop’s good name; it’s erasing the violent gangster rap image and replacing it with something that’s all about having a good time. Like New Boyz, another group is spearheading this movement on MySpace, YouTube and the likes. They are the UCLA Jerk Kings: BB the Jerk, Prophet and Shane the Jerk.

Although their name suggests otherwise, these three athletic, humorous and outgoing Jerks don’t go to UCLA; the name represents the visualization of Los Angeles, as in “you see L.A.” They’re actually still teenagers – BB just graduated high school and Shane and Prophet are heading into their senior year, but their age hasn’t hindered their online popularity. If anything, it’s stimulated their growth on the Web since teens are constantly frequenting it, giving them an impressive two million views on YouTube.

The boys never expected their fame to skyrocket the way it has. They were approached by DJ Eklectiq, a previous member, and they simply figured, why not? They never thought anything would come of it. They were three best friends, um excuse me, brothers, who were just goofing off and having a good time.

They claim, “We were musicians anyways, so now we’re making jerking music,” and gaining them recognition as one of the first jerking crews.

While they may seem like stars on the rise, they aim to stay true to themselves.

“We’re hoping to get signed by a label that won’t change our image,” states BB.

They want to continue being creative, working on their self-taught moves and making their own music without a label trying to make them more appealing to the masses. At the moment, being themselves means continuing with their jerking, but they are being strategic about their careers. They realize the movement will eventually die out, so they hope to come out with a demo, featuring jerking music as well as slower songs, one of which will be a collaboration with Omarion.

“Jerking’s just a free dance,” says Prophet. “You can add moves. It doesn’t have a script.”

All they really care about is holding onto this freedom of movement, sticking to their identity and having fun with their besties. However, that doesn’t mean they’re not trying to make the most of it in the process. All three agree that they want some form of payment out of their fame, and of course, they have been taking advantage of the attention they’ve been receiving from the ladies, well most of them at least.

To reach their ideal success they’ve obtained sponsors, they’ve acquired Internet fame, they’ve made their own jerking, hip-hop and rap music. So what’s next? They’ve had reality show offers, endorsement requests, but nothing serious.

They’re featured in the new Candor Entertainment Webisode, “Skinny Jeans: The Movement” and they constantly perform at L.A. jerking events. One thing’s for sure, they’re considering college, maybe SMC, and then transferring, but they do not plan on breaking up anytime soon.

According to BB, “We’re all crazy on the stage when we perform. It’s the most fun thing to do.”

“Skinny Jeans: The Movement” launches on Hulu.com Sept. 1. Episodes can also be viewed on CandorTV.com.