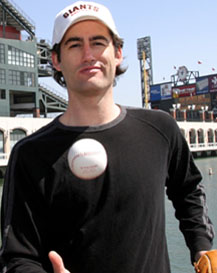 When San Francisco Giants’ outfielder Barry Bonds broke the record for the most home runs hit in a season in 2001, the baseball that marked his amazing achievement became the focus of a legal battle between Alexander Popov and Patrick Hayashi, the two men who tried to catch "number 73" as it went sailing into the stands at Pac-Bell Park.

Michael Wranovics, a longtime Giants fan, saw a news clipping about the incident the next day and decided to make it the focus of his first film. Wranovics has an MBA from Stanford and left behind a career as a high-tech marketing executive to pursue filmmaking.

"I dropped everything as soon as the ball got locked in a safe deposit box," says Wranovics, who has never come close to catching a ball at a game.

Four years later, Up for Grabs is seeing a theatrical release after winning documentary prizes at the Los Angeles and Phoenix film festivals.

"I decided this was going to be my first film and, fortunately, we got the film distributed and audiences are really seeming to enjoy it. It’s definitely what I’m fired up about doing the rest of my life," he says.

Wranovics says that, as a viewer, he has always been a big fan of documentaries, liking that the genre is not limiting for filmmakers.

"I think there’s an incredible amount of potential for documentary films. There’s always an interesting human story out there and it’s limitless," he says.

People might assume Up for Grabs is meant to be a serious examination about who deserved to get the ball, Wranovics says, but it is really meant to be a satire.

"It’s basically a tale of absurdity," Wranovics says, not a heavy-handed look at who should get possession of a baseball hit into the stands.

The film also provides social commentary by looking at how "people are more interested in getting rich quick and their 15 minutes of fame in this country than ever before," says Wranovics, who financed Up for Grabs out of his own pocket, initially, and then with help from private investors.

"I went to people who weren’t necessarily rich or had any background in funding films, but had some extra money on hand and were very interested in getting into the film world in some way, and took a shot at helping a first-time filmmaker get his start."

As Popov versus Hayashi unfolded, Wranovics had to wait to begin filming.

"There were lots of things to do on the project in the meantime, but it was tough because things were so drawn out and it took a long time for the trial to occur," he says.

At one point, Wranovics thought he would have to release the film without an ending because the money was running out.

"I felt like I was going to have to release something and just kind of leave it hanging. Fortunately, we were able to raise more money and go out to New York for the auction and complete the story," he says.

There’s always a risk with documentaries that the real-life outcome will not mesh with what the director wants, but Wranovics says he got the ending he wanted.

"I definitely was hoping there would be a moral, but I figured that the moral would come from the ball not selling for millions of dollars," he says.

Wranovics continues to pursue his dream of making movies and is going to start on another feature-length documentary after he’s done promoting Up for Grabs.

"I definitely plan to finish writing the screenplay that I started and I have several other ideas for narrative film," he concludes.