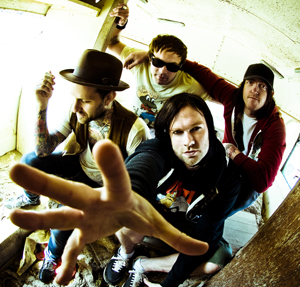 Naming an album something as abstract as Artwork is a pretty ballsy move, just don’t tell the Used that. What began as an accidental coincidence when working on 2007’s b-sides collection Lies for the Liars turned out to be a natural fit.

“It’s kind of the theme going on right now for everything,” bassist Jeph Howard explains. “It’s crazy how the word artwork has the word work in it. Work of art. Live to work or work to live. It’s weird how life really is all about art and work.”

For the Used, which also features Bert McCracken on vocals, Quinn Allman on guitar and Dan Whitesides on drums, the process behind the group’s fourth studio album, Artwork, included the most work it has ever put into making a record. The guys even go so far as to say it was something they had to make, almost like their first record was.

Involved in this sonic makeover was McCracken toning down his trademark screams, instead focusing more on singing and melodies. But Howard is quick to point out the band hasn’t gotten soft.

“I think it’s the heaviest record we’ve done. I think it’s totally different. Just screaming doesn’t make certain things heavy to me,” he notes. “I think Bert doesn’t need to scream. He can if he wants, but it’s like everybody’s doing the scream and sing thing, trying to get heavier with certain things. We just want to write awesome rock songs that we feel comfortable about. That’s it.”

A prime candidate is opening track “Blood on My Hands,” an upbeat rocker quickly becoming a fan favorite.

“‘Blood on My Hands,’ the first single that we just put out, was one of the last two songs that we wrote,” Howard says. “It kind of came out of nowhere. Usually the best ones, it seems, come out of nowhere like that.”

Yet while the band started writing for Artwork in early 2008, it didn’t heed many of the external pressures it has become familiar with through the years.

Another contributing factor was the addition of Whitesides, who has been in the band for three years but helped with songwriting for the first time.

“I would say we feel we’ve come together stronger as a band the last three years, that’s for sure,” Howard says. “I think Dan being in the band has definitely brought us closer and stronger and tighter as a band and musicians.”

The band’s close-knit camaraderie dates back to its days growing up in Utah, a place musicians seldom make it from.

“We always heard that,” Howard explains. “It was like, ‘You guys really are never going to make it. No band from Utah makes it out. Nothing from Utah gets out.’ You know what I mean? We really didn’t care. With this band, all we wanted to do was write music. We just wanted to jam together and write music. After a while, we couldn’t even play shows. There were no venues where we lived. They all closed down, so we even stopped playing shows. We were like, ‘Whatever. Let’s just write songs.’”

That work ethic, it seems, has served them well.

Artwork is currently available. The Used will perform Nov. 10 at the Wiltern. For more information, visit theused.net.