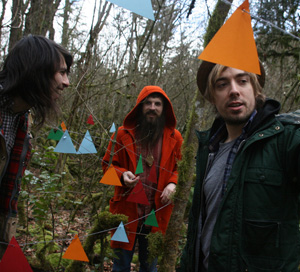 Let Nurses wrap you in their gauzy sound at the Echo Sept. 15.
(Credit: Nilina Mason-Campbell)

An apple a day may keep the doctor away, but what happens when the nurse brings you a whole acre of them? When the candy stripers in question are Aaron Chapman and John Bowers, a.k.a. Nurses, chances are that you’ll want to take a few big juicy bites.

The pair produces sublimely psychedelic music that oddly enough sounds a little bit like classic rockers Supertramp in slow motion. Dead Oceans, Nurses’ label, refers to the band’s just-released Apple’s Acre as “Heart on its sleeve pop that engages in a double-dutch jump rope match with the euphoric surrender-to-the-weird that is essential to psychedelia.”

Gee, they coulda just said “check it out if you like stuff like the Appleseed Cast!” Nurses will be happy to wrap you in their gauzy sound when they appear at the Echo Sept. 15.

Next February marks the 10th anniversary of the death of rap star Big Punisher and Vivendi Universal Entertainment is about to release a film on DVD that celebrates the life of the first Latino hip-hop artist to reach the platinum sales plateau. Big Pun: The Legacy documents Pun’s meteoric rise through performance footage, much of which has never been seen before, and interviews with a who’s who of stars including Snoop Dogg, Prodigy, Sticky Fingaz, Chuck D, Bones Thugs-N-Harmony and members of the Wu-Tang Clan. Interview footage with Pun himself and his widow, Liza Rios, is also included in the 93-minute movie.

Legacy Records will be releasing the film’s soundtrack, The Legacy: The Best of Big Pun (Music from the Film), with 11 cuts from Pun’s Capital Punishment and Yeeeah Baby albums along with cuts from Beatnuts, Noreaga and Lord Tariq & Peter Gunz that feature Big Pun.

The film releases on Sept. 15, and the soundtrack CD drops on the same day. Excessive weight (300-plus pounds) was the main contributing factor behind the heart attack that killed the beloved artist whose real name was Christopher Rios.

The Return of Squirrel Nut Zippers

Squirrel Nut Zippers are about to release their first album in nine years, a live effort entitled Lost at Sea.

The band offers an interesting (but completely phony) reason for their departure from public life: “In 2002 the cruise ship we were performing on hit a massive island of trash and was rendered unseaworthy. We were forced into a dinghy that was quickly swept away by ocean currents and deposited on a remote and uninhabited island. We survived on coconuts and monkey scat until a location scout for the television reality show ‘Survivor’ stumbled upon us and brought us back to the States.”

Obviously the band hasn’t lost their sense of humor during their hiatus, and they’re considering recording a new studio album next year. Lost at Sea drops on Oct. 27.

If there were only a couple of things you needed to know about the Sian Alice Group the first would be how to properly pronounce their name – Sian is pronounced as “Shahn.” The second would be that Sian is a she, and she’s the lucky one who gets to sing over the set of ethereal soundscapes that is Troubled, Shaken, Etc., the just-released new album from this U.K.-based group of sonic explorers.

The aggregation won tons of kudos for their 2008 release 59.59 and they count eclectic band Spiritualized among their biggest supporters. Fans have two rare opportunities to hear the band live locally: Sept. 27 at the El Rey and Sept. 28 at the Echo.