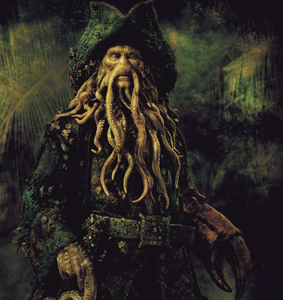 Besides sequels and remakes, there is a third form of exploiting a successful film, comic book or television series: the spin-off. A spin-off is when you take a supporting character from a successful property and give that character its own comic book, film or TV show.

Sometimes it works out, but more often than not, it doesn’t. The success of a spin-off relies solely on whether or not that supporting character is just as cool, if not cooler, than the main character, and whether or not the audience really cares enough to see that character out on its own.

Spin-offs can either develop supporting characters more by seeing them move on from the main story or go back into their history to tell their origin story. I prefer origin stories.

A few examples of spin-offs are the recent X-Men Origins: Wolverine spun from X-Men, “Frasier” spun from “Cheers,” Electra spun from Daredevil and “The Lone Gunmen” spun from “The X-Files.” So, in honor of the origin story spin-off, I’ve selected five supporting movie characters and provided backstory possibilities for them complete with director suggestions. Enjoy!

Davy Jones (played by Bill Nighy in Pirates of the Caribbean: Dead Man’s Chest and At World’s End directed by Gore Verbinski)

There’s nothing better than an empathetic villain. As much as you’re positioned to hate Davy Jones in the films, you can’t help but love him because you get a sense that despite being a bad guy, he’s not sadistic or crazy. Once you know his backstory of having his heart broken by the witch Calypso, turning him into the creature he is, you can’t help but want to see him as a young man destined for tragedy. I would pull Verbinski off the bench and have him return to the series to direct Jones’ origin.

HAL 9000 (voiced by Douglas Rain in 2001: A Space Odyssey directed by Stanley Kubrick)

“Just what do you think you’re doing, Dave?” If you’re not familiar with that line, then you definitely are not familiar with having my respect. The infamous Hal 9000 is the ultimate nightmare of when artificial intelligence becomes aware and starts thinking for itself.

For a spin-off, I would love to see a story about the creation of Hal 9000 and some creepy setup as to how he became the moody AI he is in 2001. I would bring in Darren Aronofsky to tackle this one.

Even though Luke was definitely the main character of the films and even though he used the force and had a lightsaber, there’s no question that Han was the badass, ultimate supporting character. The tragedy is that he’s the only character who doesn’t get a backstory in the prequels. For Christ’s sake, even Chewbacca gets setup in the prequels!

I want to see where Han was born, where he grew up, how he became a smuggler and how he got into trouble with Jabba the Hutt, and I don’t want to read about it in a book or a comic! For director, I would give the job to George Lucas’ old college buddy, Steven Spielberg.

Tuco (played by Eli Wallach in The Good, the Bad, and the Ugly directed by Sergio Leone)

“Whoever double-crosses me and leaves me alive, he understands nothing about Tuco. Nothing!” When Eli Wallach utters those lines, you believe him.

In Tuco, Leone and Wallach created a wonderful empathetic anti-hero with an unfortunate past. In the film, Tuco comes across his brother who has become a monk, and we get only a taste of Tuco’s dysfunctional past.

How awesome would it be to see a film about how Tuco became an infamous wanted bandit and how his falling out with his brother went down? Nobody knows or pays homage to Leone like Quentin Tarantino, so it’d have to be him in the directing chair.

Another incredible empathetic villain, Brando’s Kurtz is a complete product of the hell that war is and is the shadow that hangs over Martin Sheen’s Captain Willard throughout the whole duration of the film. His terrifying, yet well-respected, reputation is all we know about him until the climax of the story comes and we see Kurtz for the first time. And boy is he everything we’d hoped he’d be.

A film chronicling his rise through the military, his psychological break and descent into madness could probably even be considered as a prequel to Apocalypse Now. I’d have to bring back Coppola to direct this one.