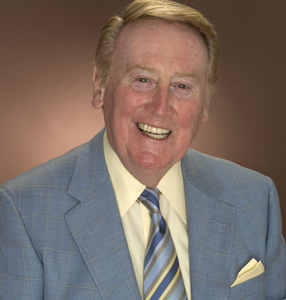 There was a rumor going around earlier this year that this would be Vin Scully’s last season broadcasting for the Dodgers. Beginning his 60th season in the broadcast booth, it seemed like a nice round number to hang up the hat and call it a career.

In a sign that the Dodgers might be thinking the same, the organization chose to honor Scully on the field in an opening day ceremony this year. Addressing a sold-out crowd of 55,000, all standing in applause, Scully spoke these few words: “You know, in all these years, I have needed you far more than you have needed me.”

Oh, Vinnie, if you only knew ... Like thousands, daresay millions, of fans in Los Angeles, Vin Scully taught me about baseball. It was he who engrained in me a love for the drama, the personalities, the choreography of the game. It was Scully who gave me an appreciation for the everyday heroism of baseball players.

He has been called “… arguably the greatest announcer of the 20th century.” But as far as I’m concerned there is no argument. Scully’s genius is a freakish occurrence, like an Einstein or Mozart.

And yet to those not familiar with the man’s genius I have often been hard-pressed to explain it. How Scully takes a game where the ball is actually in play for only 10 minutes and fills it with excitement and meaning for over three hours.

You have to sit with the man, to listen to him over many innings, over the course of a season, to properly appreciate his immense talents. Only then would you begin to sense the man’s greatness and his importance as a cultural icon.

Ironically, part of what makes Scully so marvelous is his humility, a kind of simple unassuming manner. Anyone who has ever listened to Scully at length has the feeling that he is a friend, and in a strange sense, he is. Even stranger still because the public knows very little about his personal life. Among avid listeners, the little snippets of personal stories he reveals on occasion are like rare gems.

Scully’s subject is the game of baseball and the wonderful characters that inhabit it. When he talks of himself it is only in relationship to others.

For this reason a certain mystique has risen about the man. The recently published biography, Pull Up a Chair by Curt Smith, attempts to capitalize on this curiosity.

In keeping with his private nature, Scully did not cooperate with the writing of the book. The information was gained by interviews Scully conducted with reporters other than the author.

Despite his lack of involvement and other shortcomings, the book is an honest attempt to illuminate Scully’s life. It is full of interesting tidbits and amusing stories from his childhood and long career.

Some interesting details of Scully’s life include that he was once an actor in college; he played centerfield for his high school team; he won the award for “wittiest” in his class. During the off-season, Vin has traveled to dozens of countries around the globe. He is a voracious reader of books; they have been his “constant companions” along so many road trips with the Dodgers.

All of these make sense in terms of the worldliness that comes across in his broadcasts. Scully can quote Shakespeare with ease or reference an obscure musical from the 1940s. What’s more is that the references ALWAYS fit the situation. It is dazzling to behold.

What is lacking in the book is a grasp of Scully’s personal struggles coping with tragedy in his life. Scully lost his father at the age of 4. His first wife died suddenly of a rare disease at 35, and one of his children was killed in a freak helicopter accident. To think of Scully’s friendly, good-natured voice persisting night after night despite such heartbreak makes one wonder at the comment about “needing you more than you needed me.”

Yet what Scully may never know is just how much he has meant in the daily lives of millions of fans. When you listen to a man for so long, you get to know his mannerisms, his likes and dislikes. You know when he is being for real and when he is putting on an act. You begin to understand the contours of his character even if you know nothing about his personal life.

Scully is always himself. To listen to his broadcast is to journey with him as his mind wanders and wonders. His supreme gift is that he can at once keep the listener keyed into the action while filling the scene with colorful stories and interesting factoids.

Then there is the voice: smooth and warm, kind and inviting. With that voice, a game of fierce competition is elevated to high art.

“Oh, what a dandy!” he exclaims with childlike enthusiasm when calling a beautifully executed play.

Despite his years, he still retains an infectious youthful enthusiasm for the game. And yet there is maturity in his character.

Out of respect for his profession, Scully does not lose himself in the emotion of the game. Many times Scully has tempered a crushing defeat with a cheery disposition, which reminds us always that it’s just a game.

It was announced recently that Scully would stay on for one more season after this year. That puts a timeline on the career of one of America’s greatest voices.

With his retirement, the Dodgers will lose their last remaining connection to their former home in Brooklyn. The art of baseball broadcasting will lose its greatest practitioner. And we will lose the daily presence of a dear friend.

Editor's Note: Neither Vin Scully nor the Dodgers have announced Scully's plans to retire.
Article posted on 8/31/2009
This article has been viewed 4079 times.