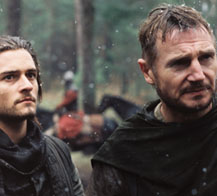 A surprising thing happens in the Crusades adventure Kingdom of Heaven: Two vast armies assemble on a battlefield for the scene we purchased our popcorn in anticipation of. And then: nothing. There’s a truce. The carnage does not occur.

Kingdom of Heaven is a huge movie, but it’s an unusually restrained one. Director Ridley Scott gives it a classical structure. Instead of dulling our senses with one combat scene after another, he makes us wait until the massive siege of Jerusalem, which concludes the film.

Kingdom is about suspense and anticipation – Scott knows we expect battles, but he teases us for 90 minutes, and then, when the battle begins, he doesn’t glorify the carnage. War is depicted as the last resort for the people of Jerusalem, who are trying to defend their home, and the scene actually feels like a climax because it’s not the 19th battle we’ve seen.

Because of the restraint, it’s almost easier to talk about what Kingdom isn’t than what it is. It isn’t interested in identifying the "good guys" and "bad guys," for starters.

Both Kingdom and Troy have the same star in semi-heroic roles – in both, Orlando Bloom has an affair with a treacherous beauty whose husband wishes his wife would stop dating other people. But, unlike Troy, Kingdom doesn’t feel silly and anachronistic (also, because it takes place in cold weather, its stars are not constantly ripping off their shirts to exhibit the work they and their Pilates instructors have been doing).

The hero in Kingdom may also remind you of the hero in Scott’s Gladiator: an average guy who enters a conflict for personal reasons (Russell Crowe avenges his wife’s death in Gladiator, Bloom tries to redeem the memory of his late wife in Kingdom) but whose experiences give him a more principled worldview.

Bloom’s character, Balian, begins the movie in France (although you may not notice it’s France, since nobody speaks French or insults Napa wines), but he journeys to the Holy Land, where the endless conflicts between Muslims and Christians teach him about the behavior that leads to war.

Kingdom does not have a hero as emotionally resonant as Gladiator – Bloom doesn’t have the reserves of pain and experience Crowe seems to. But the special effects are even better than Gladiator’s – particularly in the superb, non-digi look of Jerusalem – and Kingdom speaks more forcefully to the present day.

As a diplomat who takes Balian under his wing, Jeremy Irons says, "I would rather live with a man than kill him," a message that still holds true nine centuries later. Even the title of the movie supports that idea.

When the characters invoke the phrase "kingdom of heaven," most of them are talking about the hotly contested Holy Land. But not all of them. Some of them are referring to a day when all people will be equal and free.