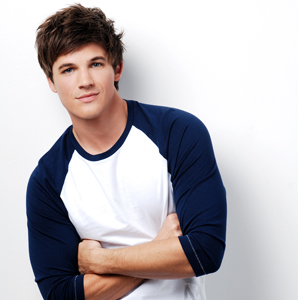 Actor Matt Lanter is on Hollywood’s radar with the recent confirmation of his role as the mysterious bad boy Liam Court in the second season of the CW smash hit “90210.”

With his good looks, charming personality and acting chops, many people assumed the 26-year-old Ohio native had always wanted to be an actor. However, that was not Lanter’s childhood aspiration.

“Like most boys, I wanted to be a professional ball player. When I realized that it just was not happening, I decided to go into some type of sports business to be around the game of baseball,” he says.

Planning to eventually work for the Braves, Lanter majored in sports business at the University of Georgia and started out as the team’s batboy for two seasons. His plan changed when he fell in love with the film and television industry.

After doing several background acting gigs, he became fascinated with the whole process.

“It was just magical to me,” Lanter says. “I guess that’s where I caught the bug.”

Lanter decided to move to Los Angeles in 2005 to pursue an acting career, where he initially struggled like many other aspiring actors.

“Obviously just the logistics of living and paying rent are stressful when you have no idea when your next job will be,” he says.

Nevertheless, Lanter was determined to succeed.

“When I arrived [in Los Angeles] I got in class and studied all the time, rarely going out. I took it very seriously,” he says.

In class, he learned the importance of developing self-confidence.

“Casting directors and producers can see through it if you don’t have confidence in what you’re doing,” he relays.

Lanter landed his first acting role on a sitcom “8 Simple Rules … for Dating My Teenage Daughter.” Eventually, his hard work and determination paid off.

Besides currently starring as the voice of Anakin Skywalker in Cartoon Network’s popular series “Star Wars: The Clone Wars,” he is also invading the big screen in Sorority Row and is in production on The Roommate, alongside Leighton Meester of “Gossip Girl” fame.

Lanter is having the time of his life. Besides gaining invaluable experience around production sets, he is also thankful to be consistently booking jobs.

“I love what I get to do everyday I know that I can’t be doing anything else right now,” he says. “I hope to inspire others that hard work pays off, and you really can achieve what you want if you put your mind to it.”