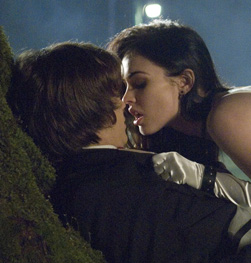 When you’re hot, you’re hot, and Megan Fox is a brand of caliente that Hollywood hasn’t seen since another Jolie fille, one whom Fox has begged to no longer be compared to, burst onto the scene in 1998 as a lesbian supermodel who loved drugs and nudity. Come on, Megan; your last name is Fox! Your exquisite sexiness was practically preordained. Embrace it, drink it in.

Although she’s continued her “No, seriously, guys, I’m awkward and self-conscious. Hell, I’m practically Alan Alda” campaign, which, incidentally, no one was buying in the first place, her latest starring role in Jennifer’s Body is going to permanently blast that argument to smithereens. Fox stars as Jennifer, the most lusted-after girl in school (typecasting, much?). She’s popular, the head cheerleader, to-die-for gorgeous … and then she becomes simply to-die-for after a satanic ritual goes terribly awry and Jennifer begins feeding on the boys of her high school.

“I don’t know why teenagers are my muses, they just are,” Cody shrugs. “Teenagers inspire me. I’m fascinated by teen speak, with youth culture. I love adolescents because they’re in a kind of purgatory. They’re not kids anymore, and, at the same time, they don’t have adult responsibilities, so they’re experiencing life, but with all these heightened emotions.”

Completing a girl-power trinity of female writer, director and star is Karyn Kusama who is best known for Girlfight, her 2000 film, which launched Michelle Rodriguez’s career and won awards at Sundance and Cannes. Girlfight, Kusama’s follow-up, Aeon Flux and Jennifer’s Body all center around powerful and violent female leads, but it wasn’t just the director’s resume that sold Cody.

“We saw a lot of [directors] and then I sat down with Karyn one day in the lobby of a hotel,” Cody recalls. “After speaking with Karyn for only about five minutes, I wanted to call the producers so badly and say, ‘Please hire this woman immediately!’ I was so excited. Her understanding was so complete.”

That same enthusiasm was shared when Fox signed on to the lead role early on in the pre-production process. From the beginning, everyone involved knew Fox was the first and only choice for the role. Bewitchingly beautiful, smolderingly sexy, demonically possessed, Fox already had two of the three elements necessary to portray the character, but she was more interested in exploring Jennifer’s depth and comedic elements.

“The way the character is written, it would be so easy to play Jennifer one-dimensionally,” Fox explains, “but we’ve added so much to her. She’s still superficial, don’t get me wrong, but there are moments when you see her legitimately hurt; she’s not always the aggressor or the predator.”

Coming off the second Transformers film, a franchise which catapulted her into the public eye, Fox was very concerned about her performance and plumbing as much nuance as possible from her acting.

“There’s no distractions,” Fox says. “There’s no robots to distract you from whatever I give, so, if it’s terrible, you’re gonna fucking know that it’s really terrible. That, of course, is intimidating, but the character was so much fun for me. I wasn’t really sure what I was doing. I was just trying to have fun with it, and I felt like I was able to make fun of my own image as to how some people might perceive ‘Megan Fox’ to be.”

Cody says her script was meant to be analogous to the plight of high school. Granted, it’s campy, gruesome and over-the-top, but it’s not that far off if you focus on the themes of high school hierarchies and the prescribed decorum.

“Any person who dares to respond in an unconventional way is branded a traitor. I think backbiting is a very accurate term and, in [the film’s] case, it’s literal. This movie is a commentary on girl-on-girl hatred, sexuality and the death of innocence,” she says, before adding, “but it’s also just about fun. I wanted to write a really entertaining popcorn movie.”

“The script was by far the funniest script I’ve read. Ever,” Fox says empathically. “It’s also the most realistic interpretation of teenagers I’ve ever read. Diablo’s really good at relating to how kids are. I was in high school just a few years ago, and it was a nightmare.”