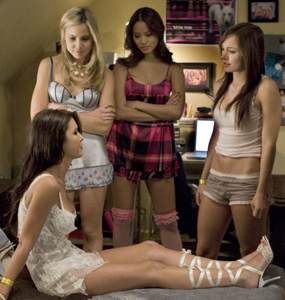 Lately, it seems the slasher flicks that glorify blood, guts and organs are all that Hollywood wants to make. Completely gone are the emotional dramas and smart comedies that have reigned over the past few years.

Well, maybe Clint Eastwood and Judd Apatow have seen to it that both genres don’t disappear completely, but these days what is really raking in box office gold are horror movies, which are experiencing a resurgence similar to the genre’s tremendous success in the 1990s with hit films like Scream. And now, filmmakers are daring to go where no others have gone before, down the darkest and most terrifying journey known to college students across the nation.

“I think sorority culture is so fascinating. It’s specific to America. It comes from all the right places: service and honor and these really good ideals. And then it goes to this darker place like crazy drinking and crazy sex. That juxtaposition is really fun and fascinating,” Hendler says.

Theta Pi is the hottest house on campus. Cassidy (Briana Evigan), Jessica (Leah Pipes), Chugs (Margo Harshman), Megan (Audrina Patridge) and Ellie (Rumer Willis) are friends who live by the bonds of their sacred sisterhood. When they decide to play a vindictive joke on a boy (Matt O’Leary) who was unfaithful to a Theta Pi sister, it’s what is best for the family. In fact, the ensemble of talented, enthusiastic actresses found their characters’ strength most refreshing.

“It’s a horror film where the girls are taking charge,” says a very meek and tender Rumer Willis. “It’s not just the men who are going, ‘OK, you stay here, and I’ll be back with an ax. I’ll take care of it.’”

The girls fake Megan’s overdose, convincing Garrett that, not only did he kill her, but that they need to cover it up by dismembering her body and throwing into a well. Genius, right? Of course the prank goes horribly wrong when Garrett, drunk and distraught, actually starts to rip into Megan’s body, thereby actually killing her.

Flash forward eight months later, and the sisters, who make a pact to deny involvement in Megan’s disappearance, are graduating. All is fine at the sorority house, until a mysterious person dressed in a hooded robe begins brutally murdering each girl, forcing the sisterhood to re-evaluate the terms of their bond.

Even though it runs like a traditional horror film, Sorority Row points its finger and laughs heartily at the characters who are based on actual living, breathing people.

“This is a parody,” insists 21-year-old Leah Pipes. “We are making fun of these girls. I honestly am not anything like my character in real life. I wear sweat pants. I look terrible all the time. When I’m around a boy I have a crush on, I can’t even talk most of the time. And I hate girls like Jessica. It was so fun to make fun of her every single day. It’s very therapeutic.”

The film was shot in Pittsburgh, Pa., forcing the women to remove themselves from the L.A. scene for several months. Though Jamie Chung was the only actress in the film who was a member of the Greek system in college, making the movie brought the six closer than they expected.

“Living with these girls in Pittsburgh for two months was all the best parts of being in a sorority,” jokes Harshman, who is best known for her portrayal of Shia LaBeouf’s BFF Tawny in Disney’s “Even Stevens.” “We hung out in each others hotel rooms. We tried to go out to Steelers games. We went up to New York one weekend. We just hung out and had a great time.”

And the bond they formed really shines across the silver screen. The chemistry between the girls is completely natural, and yet it doesn’t detract from the brutally gruesome and horrific murders.

And are they gruesome! Though not as visual as films like Saw, this one will make you jump sky high from your chair because everything likes to pop out of nowhere brandishing a sharp object.

It’s a movie about a murdering psychopath out to get hot, thin, predominantly unclothed college girls, and it refuses to take itself too serious, which is exactly why it works. I mean, after all, you’ve just got to love college.