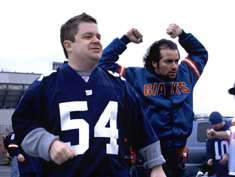 Patton Oswalt and Kevin Corrigan in Big Fan
(Credit: First Independent Pictures)
What do you get when you mix the little chef from Ratatouille with the tormented, dark talent of the man who wrote The Wrestler? Big Fan, Robert Siegel’s debut in the hyphenate role of writer and director.

This murky, devoutly independent dramedy stars Patton Oswalt as Paul Aufiero, a 35-year-old whose existence revolves around one thing and one thing only: New York Giants football. He spends his days living at home with his mother, his nights working at a parking garage and Sundays with his best friend (Kevin Corrigan fulfilling his usual sidekick duties brilliantly) in the Giants parking lot watching the game on TV, tailgate-style.

But when he has the chance to meet his idol, a Giants linebacker, things go horribly awry.