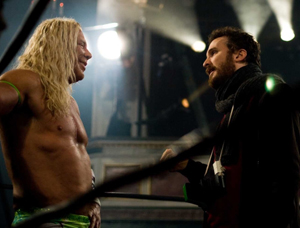 Mickey Rourke and Darren Aronofsky on the set of The Wrestler
(Credit: Fox Searchlight)

For my 120th installment of Screen Shots, I’m going to share with you my top five “working directors” list. I consider these five directors to be at the top of the art form right now.

When you walk out of a film directed by one of these guys, whether you liked it or not, you know you just saw the work of a master and not someone who’s focused on scamming you into the theater and snatching up your last $10. These are not the only working directors I think are awesome, but I decided to keep it short and just name five people who represent the presence of the kind of filmmakers this art form will never stop having a deep need for.

Ironically, yet unsurprisingly, I loved all of these filmmakers’ last theatrical releases (three of which were nominated for Oscars last year). But above and beyond all that, these guys are just great storytellers.

Darren Aronofsky – Damn near every frame in one of Aronofsky’s films could be a famous photograph. The way he puts shots and sequences together is comparable to how a painter decorates his canvas with colors. Like David Fincher and Christopher Nolan, Aronofsky is attracted to psychologically rich characters and knows just how to use them. After three solid films in his comfort zone, Aronofsky surprised everyone with last year’s The Wrestler. No other film last year made me feel for the main character like that film did.

David Fincher – If Fight Club isn’t one of your favorite films, you definitely know 10 people whose it is. Fincher is an amazing director and an incredible visionary. Although not a writer himself, he definitely knows how to put a story together. Fincher is quoted as saying that he likes films to ‘scar’ instead of just simply ‘entertain’, and whether or not you feel scarred by one of his movies, I’ll bet it made you feel something. A lot of people were divided over last year’s The Curious Case of Benjamin Button, but I thought it was a truly beautiful and remarkable film.

Christopher Nolan – Nolan will forever be the man who took away the stupid excuse: “Hey man, it’s just a comic book.” A movie is a movie, whether it’s Shrek or Hamlet. If only every superhero franchise had it’s own Chris Nolan. He is one of the best at crafting fantastic concepts for films and just as good at turning them into psychologically rich stories. The Dark Knight not only gave us one of the best comic book villain performances of all time, it transcended just being considered a comic book movie and opened the door for serious interpretations of superheroes.

Martin Scorsese – Scorsese comes from the golden era of filmmaking: the 1960s to 1970s. Out of all the filmmakers that came out of that time period, nobody has been able to update their style and adapt with the times while retaining the essence of what made him who he is. Scorsese has crafted some of the best and most influential films of the last century and worked with a lot of the greatest actors of all time. To any film student out there: If you were to run into Scorsese in the street, you better throw yourself at his feet and beg him to give you the privilege of being spat on by him. The marriage of Scorsese’s directing and Jack Nicholson’s acting in 2006’s The Departed was a gift from heaven.

Quentin Tarantino – Filmmakers who have an expert knowledge of film history will always be the best. Nobody is better than Tarantino at taking bits and pieces of inspiration from films that have influenced him and creating new original works of art. The man has created a genre all his own. Not only does he know how to tell a good story, he picks great actors and pulls great performances out of them. This year’s Inglourious Basterds is so far my favorite film of the year.