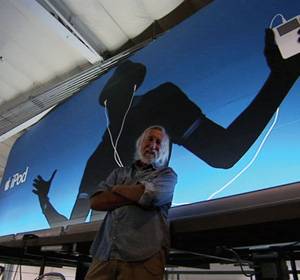 Lee Clow has been largely responsible for Apple’s ad campaigns since 1984.
(Credit: The One Club for Art & Copy)
In 1970, the average American consumed approximately 1,000 advertisements every day. Since then, that number has gone up significantly. Today, the average American takes in about 5,000 ads every single day. Whether that’s in the form of commercials, print or logos – it’s still a disgusting statistic.

Though we tend to think of advertisement as a deceitful and materialistic art form run by crooks and liars, there is a definite strategy and skill that fuels the consumer craze. Yes, those Jack in the Box commercials depicting their sumptuous mini Sirloin Burgers that run at two in the morning just when you get home craving something greasy – those ads are manipulative.

But have you thought about what our society would be today if we didn’t have the “Got Milk?” campaign, Nike’s “Just Do It” or Apple’s “Think Different?” These are the good ads, the ones that keep cows in business and get our lazy butts out into the world. We owe a ton to the geniuses behind the “creative revolution” of the 1960s, even if we process their designs only on a subconscious level.

Art & Copy is a documentary that reveals the people behind the most famous ad campaigns the United States has ever seen. George Lois, Mary Wells, Dan Wieden, Lee Clow and Hal Riney: you probably do not know their names. Their ideas, however, have shaped the way products are marketed and sold.

During the ad campaign revolution, these artists, writers and visionaries rebelled against the blatantly generic ads run by nearly every major corporation. It started with the introduction of an aesthetically pleasing, artistically developed billboard for the Volkswagen Beetle. Then television commercials started appealing to the mass target audience – real people.

Now, the entire industry is still run by the baby boomers who developed the idea of selling culture as well as a product. Their creative offices, their success stories, their lives are documented in a way that does not glorify the industry, but provides a nostalgic look into how far we’ve come.

For anyone interested in American culture, this film is a must see. Director Doug Pray intricately guides the viewer on a scattered but fascinating path through every facet of the ad world until you find yourself intrigued by how everyday slogans and products were developed by the creative masterminds.

And as much as it kills us to admit it, we’re sold.