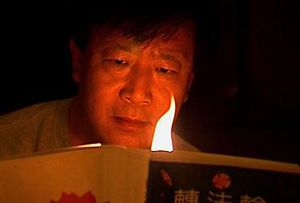 Sandstorm’s Hetian Ying (Rong Tian)
(Credit: requisitefilm.com)
It was a movement you probably have never heard of. Lord knows, I hadn’t.

Falun Gong is a spiritual practice that was founded in China by Li Hongzhi in 1992. Centered on five sets of qigong exercises, Falun Gong teachings focus predominantly on the principles of “truthfulness, compassion and forbearance.” Because practitioners of the pseudo-religion have no membership system, an imprecise figure has been estimated (roughly between 70 million to 100 million people in China).

In 1999, the People’s Republic of China led by Jiang Zemin began to crackdown on the practice known as Falun Gong. The regime against the fledgling religion included illegal imprisonment, beatings, forced labor and psychiatric abuse, to name a few.

The persecution of Falun Gong reached such proportions that according to the United Nations Rapporteur on torture, two-thirds of all reported torture cases in China concern Falun Gong practitioners who are also estimated to comprise half of China’s labor camp population.

The most tragic part of this social repression is that Falun Gong enthusiasts are still facing discrimination and maltreatment 10 years after the initial struggle emerged. Hence the inspiration for the new film by actor Michael Mahonen. Sandstorm was written and directed by Mahonen, who converted to the Falun Gong practice in 2001.

Sandstorm is the story of Hetian Ying, a Chinese police officer, who is trapped in his house for 12 days and nights with his wife. With no electricity and dwindling resources, the couple is forced to relive the last few months.

The film flashes back and forth in time, revealing the horrific truth about Hetian’s employment – he was directly in charge of persecuting, torturing, even murdering Chinese people who followed Falun Gong movement.

Not only is Hetian forced to spend his days reliving every excruciating memory, but he must also care for his ailing wife who refuses to eat because their daughter did not make it home before the storm hit.

Of course, the sandstorm is one big metaphor for the stuff that has blinded the Chinese public from the truth. It is only in the last scene that everything comes full circle. The storm clears when Hetian gets a call from his daughter who was saved from the meteorological phenomenon by Falun Gong practitioners, the very people he was paid to hunt.

The recurring theme, metaphor and apparent historical significance are far too apparently interrelated for my taste, though first time writer-director Mahonen makes the most of his limited resources. About the only thing the film does best is to force the viewer to ask the necessary questions about the movement that affected so many.