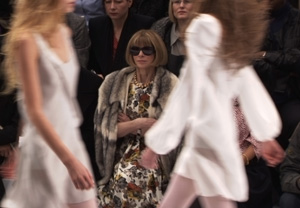 Anna Wintour (Editor-in-Chief, Vogue)
(Credit: Courtesy of Roadside Attractions)
Oscar and Gaultier and Vuitton, oh my! For anyone who dreams in couture, lives for their stilettos and owns or can quote any of the following: Unzipped, Sex and the City and/or The Devil Wears Prada; The September Issue is a cinematic journey to Mecca.

Shot with unprecedented access, the documentary follows Anna Wintour and her staff at Vogue as they prepare the legendary September issue, the largest and most important edition of the year. Wintour, the magazine’s editor for 20 years, reportedly consented to the documentary as her way of responding to the aforementioned … Prada.

If she was hoping to dispel any rumors about her sharp, rigid, hyper-exact frigidity, she’s done something she’s seemingly incapable of: she’s failed. However, if she wanted to illuminate viewers and give them a great understanding of what she does and how ferociously genius she is at it, she’s achieved a thundering success.

Weaving through the hallowed hallways of Vogue, zigging and zagging around racks of the most exquisite clothing in the world, from the runways of Paris to the modest showroom of (then) up-and-coming designer Thakoon, who Wintour discovered and mentored, R.J. Cutler’s film demonstrates that Wintour isn’t just an editor; she is THE voice and vision of style, in America and around the world. As one interviewee decrees, Wintour is the Pope of fashion.

But the film isn’t just about Wintour, it’s about the glory and glamour, strife and struggle of creating a style bible. André Leon Talley flutters in and out like the kaftan-cloaked mad genius he is, hollering things like “It’s a famine! A famine of beauty!” but the film’s heart and soul rests in Grace Coddington, Vogue’s creative director, a styling mastermind, Wintour’s co-worker for two decades and the only person who seems to have been able to lip off to her and live to tell the tale. Coddington, who is vivacious, spunky, immeasurably talented and refreshingly honest, grounds the film and is one of the few subjects who make the audience feel like they’re a part of her journey, rather than a spectator.

What else would you expect from Vogue?